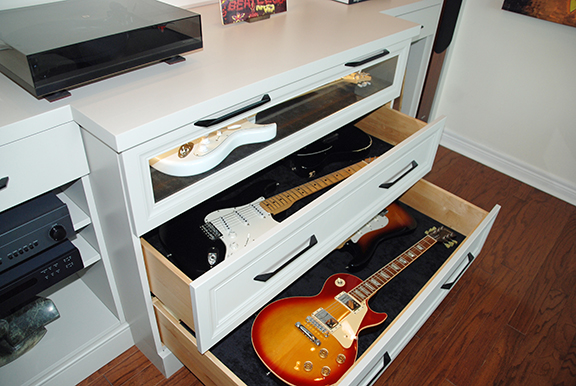 A guitar drawer stores some of the guitars in the Beach condo of a local collector. Photo: Submitted.

Rod’s British mum was visiting her Birmingham family. She returned with a first edition Parlophone pressing of Sgt Pepper’s Lonely Hearts Club Band. It cost two British pounds.That album had not yet been released in Canada so it proudly made the rounds of many rec-room parties. He affectionately blames his brother for its eventual disappearance. He replaced it this year with an identical one from England. Cost: $300.

Most of us have eschewed the weight of our vinyl collection with so much digital music at our fingertips. Not this guy.

The Beach resident stored his albums in the dusty corners of his basements, moving them around the country.Ten basements in all, in four different cities.

He’s a self-described minimalist, but he does not part with certain treasured bits, like ‘case candy and hang tags.’ It’s a thing with collectors. Those are the product info tags and promo material that usually hang from the tuning pegs of a guitar.

Why does vinyl still hold such appeal ?

Rod offers a favourite quote by a BBC Radio DJ, John Peel: “Somebody was trying to tell me that CDs are better than vinyl because they don’t have any surface noise. I said, “Listen, mate, life has surface noise.”

“Vinyl is not just more musical but it’s more active and tactile,” said Rod. “Getting up to change an album, choosing and cleaning the next one, it’s all part of the experience.”

He uses a special vinyl record cleaner found on a recent visit to Washington D.C. – a formula used by the Library of Congress to preserve their archival sound recordings.

Rod’s latest move landed him in a condo in the Beach overlooking Lake Ontario. The albums went straight into their storage locker, the guitars securely tucked under beds and the rest of the musical gear stored in linen cupboards.

He’d pull it all out when the mood would strike and plug into his 1959 Fender tweed amp, playing along with his favourite blues LPs like Michael Bloomfield or Paul Butterfield Blues – never after 11 p.m.

Albums, electric guitars, amplifiers, pedal boards and Tannoy speakers don’t usually mix well with condo neighbours. Yet their penthouse floor with only three other units, all separated by concrete, makes for surprisingly reliable sound buffering. Besides he chuckled “when you’re over 60, your days of blasting tunes into the wee hours are mostly in the rear view mirror.”

Rod’s wife blanched at the thought of trying to incorporate this gear-heavy love affair with music into a classic condo redesign. They talked about how they could do it ‘stylishly’. No milk crate storage happening in this upscale space.

They had stumbled on a talented home designer – John Courtney, of Herriot Kitchens. He overhauled their builder kitchen incorporating copper elements made by local artisans and a walnut island crafted in B.C.

His engineering background and his own love of music growing up in the United Kingdom made him enthusiastic for the task. He shared a story about losing his hearing in one ear at a Led Zeppelin concert in England.

Glamming up a space to house more than a few well-loved electric guitars and many hundreds of albums was no small task. There were no designs online that one could adapt. Everything looked too rustic.

The inspiration for the design approach came from Rod’s recent trip to a guitar museum in Chattanooga Tennessee. He saw beautiful guitar drawers that might make one think that dining accessories and candles might be stored inside. He reached out to the museum and asked for construction details to get John started on drawings.

The final product more than met their expectations, and demonstrates that not only can everything old, be new again, but it can actually be more beautiful.

The plans for enjoying more music are in the works. There’s a rural music barn being designed in his head and the condo is now up for sale.

Can’t get enough of that surface noise.