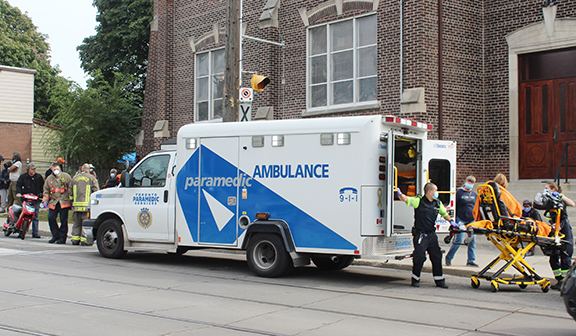 A woman is taken into an ambulance for treatment after being struck by a vehicle in a crosswalk at Gerrard Street East and Golfview Avenue on the afternoon of Wednesday, Oct. 14. Photo by Alan Shackleton.

A woman suffered what appeared to be a leg injury after being struck by a vehicle in a pedestrian crosswalk on Gerrard Street East at Golfview Avenue this afternoon.

The incident took place at approximately 2 p.m. on Wednesday, Oct. 14 at the crosswalk directly in front of the Grant African Methodist Episcopal Church on Gerrard Street East. The area was busy at the time as numerous people were in front of the church for the distribution of food bank items.

The woman was struck by an eastbound vehicle believed to be a small commercial van. The driver remained at the scene.

She was put into an ambulance for treatment by paramedics for a leg injury which did not appear to be serious.

Along with the paramedics, Toronto firefighters and police also responded to the incident.

In March of this year, a 12-year-old girl suffered a broken arm after being struck by a vehicle while at another pedestrian crosswalk a bit further east along Gerrard Street East. See our stories on that incident and reaction to it at: