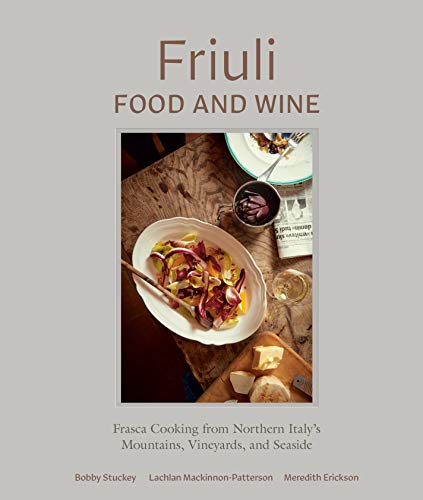 When last we spoke I left off talking about a book called Friuli Food and Wine: Frasca Cooking from Northern Italyʼs Mountains, Vineyards and Seaside.

Friuli is often clumped together with the “north” that being Piedmont, Trentino Alto Adige, Veneto. While yes Friuli is part of the north, it is the northeast of the country and also distinct from the other areas.

Blanketed by the Carnic Alps and Julian Alps down to the Adriatic Sea, it borders with Slovenia and Austria. Its grape varieties and styles are as varied as its landscape. It also has to contend with the bora winds much like the mistral winds in France.

FGV is also known for its red wine most notably Schioppettino, Refosco, Pignolo along with Cabernet Sauvignon, Merlot, Cabernet Franc.

Mario Schiopetto www.schiopetto.it is considered the person who put this region on the map. The Jermann Family https://www.jermann.it/_uk/ are also one of the long standing established respected vintners of this area as well as Nicola Manferrari of Borgo del Tiglio http://borgodeltiglio.it/en

The orange wine movement that is so popular now had its debut in this region many moons ago. The most notable producer being Josko Gravner. An absolutely fascinating man! https://www.gravner.it/en/home.html.

And letʼs not forget the grappa innovation from the Nonin family at https://www.grappanonino.it/en turning the grappa world on its head!

The cuisine differs in that it tends toward the savoury. Itʼs more herbs and spices, fruits and mushrooms. Think rosemary and thyme….not the television show:) pears and peaches, pork and prosciutto. Itʼs about game, fish, venison, jus sauces. Quality ingredients.

Unlike most of Italy where tomato sauces in various incantations are the name of the game, nary a tomato or a rare few comprise the largest portion
of dishes here.

We made the Tagliatelle al Ragu Bianco, Tagliolini Al Portonat as well as the Roast Pork and Peaches from the book. What wonderful expressions of flavours and textures! Rosemary is the main component in the Ragu Bianco, prosciutto and poppy seeds in a cream sauce in the second. They were paired with the Jermann Where Dreams Chardonnay 2017.

The roast pork was paired with Schiopetto Rivarossa Rosso 2016 as well as the Jermann Chardonnay.

Zamo No Name Friulano is refreshing and crisp with lemons and great minerality, which paired well with prosciutto that was whisper thin and melted in your mouth along with montasio cheese.

For dessert we made a vanilla ice cream and sorbetto (blackberry,blueberry, raspberry concoction) with freshly cut ripe peach slices. Unable to get a bottle of dessert wine Picolit from the Friuli region, we paired it with the Michele Chiarlo Palas Moscato DʼAsti from Piedmont. Itʼs five per cent alcohol and a perfect accompaniment with its slight effervescence and lovely balance of delicate fruit on the palate.

I highly recommend this book!