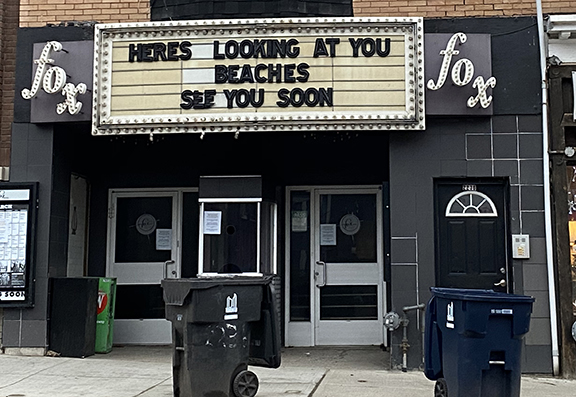 Back in March, the Fox Theatre posted this message for the community when it was forced to close due to COVID-19. The theatre reopened in early August, but will have to close again as of 12:01 a.m. on Oct. 10 as Toronto has been moved back to Stage 2 in the province's COVID-19 protocols. Photo: Susan Legge.

Indoor dining, gyms, cinemas, and more are set to close in Toronto, alongside Peel Region and Ottawa, as the regions move into a modified version of the province’s Stage 2 reopening phase – a week after Toronto’s Medical Officer of Health Dr. Eileen de Villa offered similar recommendations.

Premier Doug Ford’s announcement on Friday, Oct. 9 comes as the province notched a record-breaking daily case count of 939, with 336 new cases in Toronto, 150 in Peel, and 126 in Ottawa.
Toronto Public Health has estimated about half of the recent outbreaks in the city are related to restaurants, bars, and entertainment venues.

“The percentage of people testing positive is rising too quickly, with some communities showing 10 per cent,” Ford said. “Hospitalizations and the number of people in intensive care have increased by 250 per cent. If rates continue, it’s predicted to triple in 30 days.”

The new public health restrictions come into effect on Saturday, Oct. 10 at 12:01 a.m. and will be in place for 28 days.

Indoor food and drink service in restaurants, bars, nightclubs, and food courts, will be prohibited.

Personal care services where face coverings are removed for the service will also be prohibited.

Wedding receptions scheduled for the weekend of Oct. 10 to 12 will be permitted, but effective Tuesday, Oct. 13 at 12:01 a.m., they will be temporarily suspended.

Premier Ford has also directed Minister of Finance Rod Phillips to make $300 million available to support impacted businesses over the next 28 days. The support is expected to waive property tax bills, hydro bills, and more. The province will release further details later this month.

“Nobody wants to see us moving backwards in our fight against COVID but we’ve got to return to more restrictions to keep ourselves and each other safe. The outbreaks at bars and restaurants especially are a clear sign that not enough people have been doing so responsibly.”

The city has also suspended several recreational programs in response to recommendations from Toronto Public Health. All indoor group classes in gyms and indoor sports team activities in Toronto will be discontinued.

The suspensions focus on indoor activities given the nature of the virus to spread quickly indoors.

Bradford said Toronto asked the province last week for more authority to impose restrictions for public health as daily cases grew in the city. While the province made its announcement, the city chose to make a decision regarding its recreational programs.

“This morning, the city made the tough but essential decision to scale back its own programming in the interest of public safety,” he said. “Without more powers or clearer direction from the province, at a minimum, the city had to take steps to manage what’s in our control.”

“That ultimately means a lot of City-run rec programs are cancelled as well as permitting for indoor social gatherings and group fitness/activities,” Bradford added.

A total of 20,000 registrations in recreational programs are affected by the suspensions. It also includes the Ted Reeve Hockey Association’s house league season which was expected to begin on Oct. 10. It has now been postponed to January 2021.

Schools and places of worship will remain open, as the province said they are the lowest source of outbreaks, with data showing restaurants, bars, and indoor entertainment as driving much of the spike in cases.