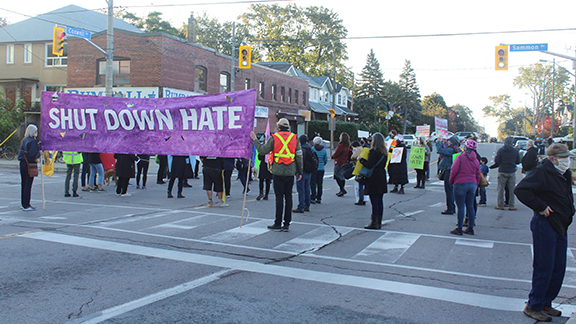 A demonstration earlier this morning against anti-Black racism at the construction site for the Michael Garron Hospital expansion briefly shut down the intersection of Coxwell and Sammon avenues. Inset photos: Zahra Dhanani, one of the community organizers, and Beaches-East York MPP Rima Berns-McGown were among those taking part in the demonstration; Tracey Tomlinson holds a sign at the demonstration. Photos by Alan Shackleton.

A large crowd of demonstrators took to the streets near Michael Garron Hospital on the morning of Friday, Oct. 9, to protest against anti-Black racism.

The demonstration and leafletting event took place between 7:30 a.m. and 8:30 a.m. outside the construction site of the hospital’s expansion on the northeast corner of Coxwell and Sammon avenues.

The event was organized by The Toronto East Anti-hate Mobilization team and Community Solidarity Against Racism in Construction (CSARC) in the wake of a number of racist incidents at the EllisDon construction site over the past few months. “We’ve got to keep bring attention to this issue,” said Zahra Dhanani, one of the demonstration’s organizers during the Friday morning protest. “All of us together, we can do something about this.”

On Oct. 2, racist graffiti towards Black construction workers was found on the hospital’s construction site. In June, employees found two nooses at the site, and on Sept. 24, another incident involving a noose took place. Also in June, nooses were also found at construction sites at Dundas and Sumach streets and at 81 Bay St.

“The community won’t accept what is happening on these construction sites,” Dhanani said. “This culture of misogynistic, racist hatred has to stop. Come on, it’s 2020!”

Demonstrators are calling for police and EllisDon to find those responsible. They are also calling on the Ontario Ministry of Labour to take action to make sure construction sites are safe, harassment-free environments for all workers.

“We shouldn’t have to be doing the Ministry of Labour’s job,” said Dhanani. Also attending Friday morning’s demonstration was Beaches-East York MPP Rima Berns-McGown. She said those hiring contractors and construction companies for work should build anti-racism and anti-harassment clauses into their contracts.

“Build into the contracts that racism is an unacceptable issue and you will not pay if it happens,” said Berns-McGown.

During Friday’s demonstration, the intersection of Coxwell and Sammon avenues was briefly closed as participants holding signs stopped traffic from getting through between about 8:15 and 8:30 a.m.

After the June incident, local residents left messages against racism around the hospital. A number of similar signs were also put on the construction wall facing Sammon Avenue during today’s protest.