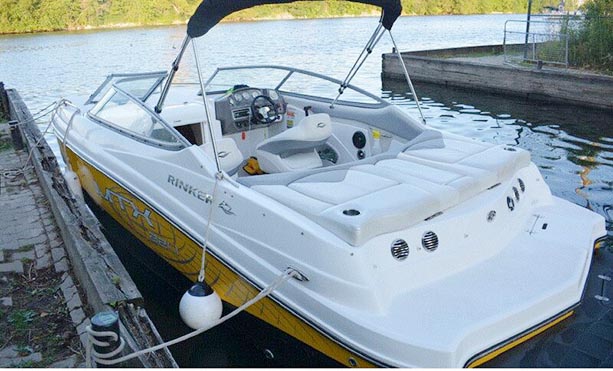 Police have released a photo of a power boat that was used in an alleged kidnapping and sexual assault off Woodbine Beach on July 11.

A man arrested this summer in connection with alleged sexual assaults and kidnapping involving the use of a motor boat off the shores of Woodbine Beach is facing additional charges, Toronto police announced this week.

Shanthakumar Kandiah, 54, of Toronto, was charged with two counts of sexual assault, two counts of kidnapping, two counts of forcible confinement and impaired boating in connection with an incident on July 11. Please see our earlier story at: https://beachmetro.com/2020/07/15/man-charged-with-kidnapping-sexual-assault-after-bringing-two-people-onto-power-boat-of-woodbine-beach/

At that time police said they were concerned similar incidents may have taken place and were asking anyone with information to contact them.

As a result of that request and after further investigation, police announced on Oct. 7 that Kandiah was facing additional charges in connection with a July 7 incident.

According to police, a man was operating a power boat in the area of Woodbine Beach on Friday, July 7 at approximately 5:30 p.m. when he met a group of three people and allegedly invited them on to his boat. Once they were aboard, the man allegedly steered the boat away from shore and refused requests from the three people to be let off the boat. Police allege the man the proceeded to perform an indecent act and sexual assault before returning the three people to shore.

Kandiah was charged on Oct. 6 with sexual assault, forcible confinement, and committing an indecent act in connection with the July 7 incident.

Police say this is a continuing sexual assault investigation.

The boat used in the July 7 and 11 incidents was a yellow and white 22-foot Rinker power boat. Police said on Oct. 6 they are aware the accused had access to multiple vessels and are concerned there may be other victims.