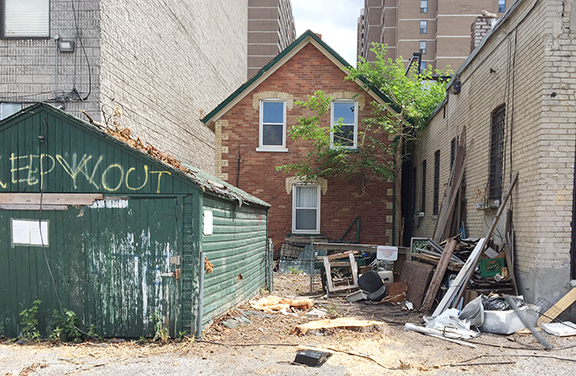 A photo of the rear of the house at 292 Main St. taken earlier this year. Inset photo shows the house surrounded by scaffolding last week as a condo project is built around it. Photos by Alan Shackleton.

The City of Toronto has served notice that a Heritage Designation is being sought for the building at 292 Main St.

Located on the west side of Main Street, just south of Danforth Avenue, the house is presently being protected by scaffolding as a condo project goes up around it.
According the city’s notice, the single two-storey detached house was built in 1887. Anyone wishing to comment on the proposed Heritage Designation must do so by Oct. 14 to the City Clerk’s office to the attention of Ellen Devlin, Administrator, Toronto and East York Community Council, Toronto City Hall, 100 Queen St. W., Toronto, ON, M5H 2N2.