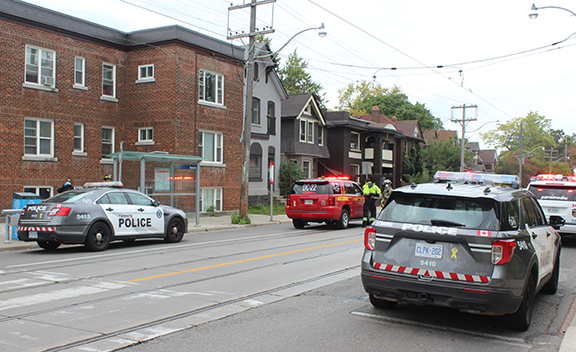 Police were searching along Gerrard Street East near Norwood Road after a man with a knife was spotted in the area earlier this morning. Photo by Alan Shackleton.

There was a heavy police presence in the Gerrard Street East and Main Street area this morning as officers were looking for a man with a knife.

According to witnesses a man came out of a residence on Gerrard Street East just west of Norwood Road about 10:10 a.m (on Oct. 6) armed with a knife.

As a fire truck arrived on what was a call for a gas leak, the man fled.

Numerous police cars were in the area driving up and down side streets looking for him.

Just after 10:30 a.m., police said on Twitter that the situation had been resolved and the man was “getting the help he needs”.