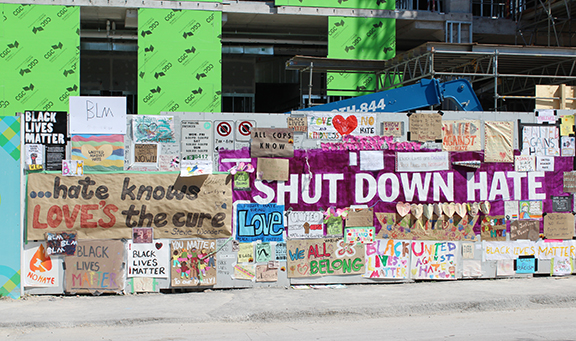 Michael Garron Hospital president and CEO Sarah Downey is saying more action is needed after three incidents of racism in four months at an EllisDon construction site on the East York hospital’s grounds. After the first incident in June, the community put messages against racism on the Sammon Avenue wall of the construction site.

“More action is needed,” Michael Garron Hospital president and CEO Sarah Downey is saying after three incidents of racism in four months at an EllisDon construction site on the East York hospital’s grounds.

Downey penned an open letter on Oct. 6 to EllisDon president and CEO Geoff Smith regarding three incidents taking place at the same construction site over the summer and fall.

On June 10, two nooses were found at a part of the site where Black employees were known to work.

On Sept. 24, another noose was found on the site, and on Oct. 2 an employee found racist graffiti in a bathroom stall for workers. “This site needs a ****** purge,” the graffiti read.

While the Toronto Police Service is investigating all three incidents, it is not treating the Sept. 24 incident as hate-motivated.

The repetitive nature of the crimes, however, convinces Downey and many in the community that EllisDon needs to do more to address anti-Black racism at its construction sites.

EllisDon, in response to the second occurrence of nooses being found, released a list of actions and initiatives it is taking to combat racism in its company and in the industry.

Steps include working with law enforcement, offering a reward for identifying the suspect(s), increasing site security, and offering employees, subcontractors, and unions diversity and inclusion education.

Downey said in her letter that she doesn’t think it’s enough.

“I appreciate the serious response taken by EllisDon in responding to these incidents,” she said, describing the construction company’s actions. “It is clear, however, that this disturbing trend requires a stronger and louder response.”

After the first incident in June, the community came together and installed a “Community Artivism” installation displaying messages of support to workers affected by racism.

“Today, I pen this open letter to you because despite your best efforts to call out these insidious hateful acts and heal with our community, it is not enough. More action is needed,” Downey wrote.

The MGH president requests EllisDon to “stop racist acts on your construction sites and on our hospital property” and to involve itself in the community to share publicly its actions in ending systemic racism.

In a statement after the second incident on Sept. 24, Smith wrote that the company will not stop until those responsible for these racist acts are found.

“Let’s be clear, this is the handiwork of one or two racist criminals, every other worker and leader is appalled at their hatred and cowardice,” he said.

“These individuals are unfortunately comfortable in the knowledge that on a heavily populated and constantly changing construction site, they will be hard to identify. But I want to send a clear message: We will not stop until you are found, charged, and permanently evicted from our industry.”