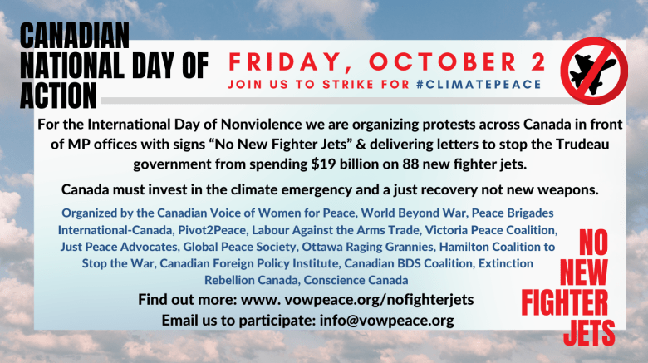 A Canadian National Day of Action to protest the proposed purchase of new fighter jets by the federal government will include an event in front of the offices of Toronto-Danforth MP Julie Dabrusin on Oct. 2.

A Canadian National Day of Action event is set to take place in East Toronto on Friday, Oct. 2 to protest the federal government’s plans to purchase 88 new fighter jets.

Locally, a protest will take place in front of the Queen Street East offices of Toronto-Danforth MP Julie Dabrusin from noon to 2 p.m.

The event is being organized by the Canadian Voice of Women for Peace, World Beyond War and a number of other peace groups.

Those involved will be carrying signs and handing out information. There will also be a letter for the MP that people can sign if they wish to do so. Everyone is welcome to take part in the event at 1028 Queen St. E., organizers said.

“Should Canada decide to proceed with the purchase, the initial cost will be $19 billion, and a total estimated cost of at least $45 billion,” said a press release about Friday’s event that was sent to Beach Metro News.

“Such a decision would certainly run counter to the priorities of the recent Throne Speech which laid out plans for a full COVID recovery, healthcare, childcare, and financial support. It also prioritized a plan to more rigorously address Climate Change and Green jobs. The deployment of 88 fighter jets would lock Canada into emitting more carbon than is allowed by the Paris agreements,” said the release.

“While the government describes the purpose of these jets as both defensive and also necessary to meet Canada’s obligations in NATO, they are essentially offensive weapons, capable of carrying destructive bombs as well as nuclear and chemical weapons. At a time of health and financial crisis, they are totally unacceptable.”

A similar protest was held on July 24 in front of Dabrusin’s office regarding the proposed purchase of the fighter jets and a letter was sent to Beaches-East York MP Nathaniel Erskine-Smith. For Beach Metro’s earlier story on this, please see https://beachmetro.com/2020/07/24/national-day-of-action-against-federal-purchase-of-fighter-jets-to-include-rally-in-front-of-toronto-danforth-mps-office/