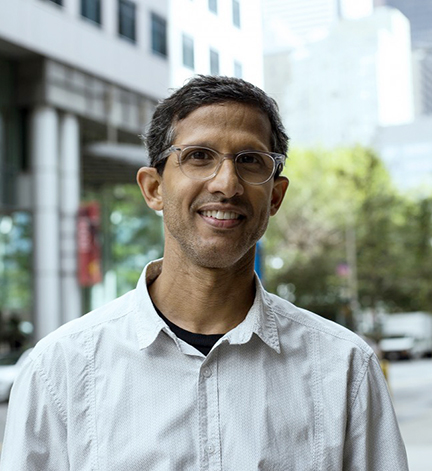 Errol Nazareth, of CBC Radio's Big City Small Word, hosts the online version of East York Days: Behind the Music! which takes place on the evenings of Sept. 23 and 30. It is presented by East End Arts. Inset photos: Artists featured on Sept.23 are Jenna Marie Pinard & Jay Yoo, and Denielle Bassels.

Local residents are invited to celebrate East York Days: Behind the Music! on the evening of Wednesday, Sept. 23..

The presentations will take participants “behind the music” to learn more about the journey and artistic process of musicians and the stories behind their songs. A three-part series, the first edition was on Sept. 16.

“This year you’re invited to join East End Arts and the host of CBC’s Big City Small World, Errol Nazareth, for an updated version of our annual concert series, East York Days: Behind the Music!,” said East End Arts on its website. “While we may not be able to gather at the East York Civic Centre for what would have been our third summer of East York Days, we are keeping the spirit and celebration of local music alive and well this year, but with a fun, new digital twist.” Pinard and Yoo are a jazz duo from Toronto. Individually and in a variety of ensembles, they have performed at venues such as Old Mill, The Rex Hotel, Upstairs Jazz, House of Jazz, Koerner Hall, Canadian Stage, Meridian Arts Centre, and Banff Centre for the Arts.

Their debut duo album Here Now was released in November of 2019.

Bassels, a Toronto Indie-Swing singer/songwriter, began down her musical career while working as an au pair (nanny) in Lausanne, Switzerland. Her charge, a young boy named Oswaldo, took lessons at one of Lausanne’s most prestigious music schools, and it was here Bassels met the teachers, students, and artists who would introduce her to the local jazz scene. At a jam session at the Hotel De Ville,  an untrained Bassels sang a rendition of Ella Fitzgerald’s Bewitched, Bothered and Bewildered and caught the attention of the musicians that would make up her first jazz combo.

From jazz caverns to music festivals she ended up performing all across Switzerland and France where she discovered jazz manouche and the Django Reinhardt style of swing music.

After two years of working and performing in Europe, she returned home to Canada. Her new album is set for release in early November.

The Sept. 30 presentation will feature Joanne Morra and Armelie Lefebvre.

For information on how to take part, please visit https://eastendarts.ca/east-york-days-behind-the-music/