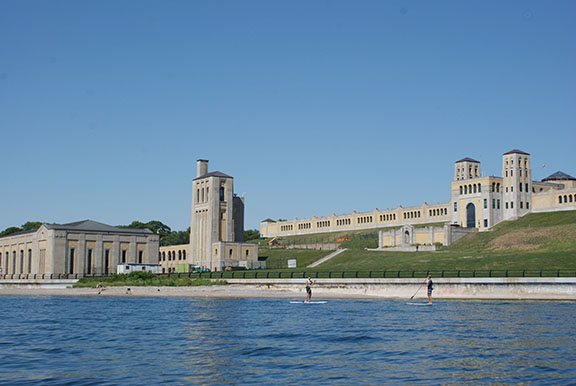 The R.C. Harris Water Treatment Plant as seen from Lake Ontario in a kayak. Inset photos: Chatting with fellow kayakers on the lake, launching the tandem kayak from Bluffer's Park, writer Richard Dionne heads to shore. Photos by Steve Nicholls.

One of the best ways to get a quick break from the city is to stay right in it – and maybe, a couple hundred feet offshore.

My partner and I have a battered old tandem kayak that’s served us well in Ontario, from Timiskaming, the Ottawa and St. Lawrence, to Georgian Bay, Mattawa and the glorious French.

But since moving to the Cliffside community six years ago, our go-to paddle is a spectacular seven-kilometre stretch of clear water between Bluffer’s Park in Scarborough and the Beach proper.

And getting there is a scant 10-minute car ride from our home.

Our launch-point is Bluffer’s Park. The steep tree-lined road tumbling down to the lake once led to a garbage dump. In the early 1970s, the city reimagined the area, got rid of the dump, and redirected thousands of tons of landfill to build a multi-acre peninsula. Today, Brimley Road leads to posh yacht clubs, waterfront parks, public boat launches, and one of the best beaches in the Great Lakes Basin.

The water out here is clean (if it hasn’t stormed), cool, and in summer, aquamarine. It’s also fairly shallow, even 100 feet out. The lake bottom is sandy, showing little aquatic vegetation, and occasionally punctuated with large round boulders. On calm days the water can be glass, perfect for beginner paddlers. But leave the lake to experts when the wind howls, because this is big water.

Fortunately, there are enough pacific days between May and October to keep even the most casual paddler happy over much of the season.

Once out of Bluffer’s we come face to face with the Scarborough Bluffs, a striking scene.

If you were dropped here unawares, you might think you’re paddling the Pontine or Ionian coasts, not offshore one of the largest cities in North America.

These Bluffs constitute layers of ancient delta sediment marking the shoreline of Glacial Lake Iroquois. The cliffs are visible over 15-kilometres, from Highland Creek in the east to the base of Victoria Park Avenue. The Bluffs then gently level out to water line at Balmy Beach. The tallest Bluffs are 300 feet high, found just east of our launch point.

The cliffs erode easily and frequently, primarily due to water run-off, the seasonal cycle of freezing and thawing, and rising lake levels that nip at the soft Bluff base. Lake level is naturally increasing over time, some 25 centimetres per 100 years, as the water outlet at Kingston rebounds upward due to the weight of the last great ice sheet, thereby slowing the exit of water seaward.

The City of Toronto responded to this with a series of rock berms that jut out from the base of the cliffs. How well these work it’s difficult to tell, as it’s not uncommon to see fences and other structures dangling off cliff tops.

That said, these berms make excellent, secluded beaches, locally called “secret beaches,” that dot the stretch from Bluffer’s. Each set of berms provides sandy, tranquil spots for lunch or quick refreshment. Today, several are occupied by locals who paddled here to sunbath, swim, or fix a quick dinner come sunset.

Vegetation along the Bluffs is lush and vigorous. The forest cover is Carolinian and decidedly deciduous. From the kayak we can make out native oak, maple, willow, alder, poplar and sumac. Golden rod and asters reach through the berms. In fact, the Toronto Region Conservation Authority counted 626 native flora that live along these Bluffs. What you won’t see, however, are the many rivers and streams that once dotted this coastline.

These lost waterways provided habitat for the American Eel that journeyed to Lake Ontario from the Saragossa Sea, off Bermuda, some 1,500 kilometres away. Here they fed, grew to maturity then returned to their Bahamian spawning grounds to renew the cycle. These eels were abundant. Even as late as 1950 they represented 50 per cent of the lake’s total biomass. It’s not surprising commercial eel fishers thrived off these shores, comprising an industry whose daily catch was sold to neighbourhood shops across the city.

In later years these streams were either diverted or infilled to provide farmland, housing and transportation space for the burgeoning city. Such human alteration occurred across much of the Great Lakes watershed and, coupled with construction of the St. Lawrence Seaway, devastated the eel population. Today, it is an endangered species and the East End eelers, a thing of the past.

With Rosetta McClain Gardens above we glided over a large glacial erratic that had washed out of the Bluffs years ago. Such relics tell us much about the movement of ancient ice sheets.

In the 1800s, however, they formed the bedrock of a competitive trade involving dozens of men in barges who hauled these rocks out of the lake to sell into the city’s nascent building trades. With the rise of local brickworks, demand diminished and so too did the presence of these tough old waterman known throughout the city as, “boulder haulers.”

One of the most enjoyable things about travelling by kayak is how low you sit on water. Your bottom half rests below waterline while your shoulders stand some 2.5 feet above surface. At this height the horizon gets closer and your world smaller, especially when looking out over the lake.

This is much different than the view from atop the Bluffs, where on a clear day you can see the mist rising over Niagara Falls and farther east, the 625-foot smoke stack in Barker, New York.

Back on water, the GPS shows that the international border bisecting the lake is only 15 miles from shoreline – about the same distance away as Mississauga.

Such proximity to the U.S. had early colonists, such as the Ashbridges, acutely concerned about invasion, especially during the War of 1812. Two Ashbridges, in fact, suited up to fight those dreaded Yanks. But the “Engagements on Lake Ontario,” as the war was known in York, didn’t pan out to much more than a few local fires and a regular disappointment to high school students ever since.

As we move westward the cliffs begin their slow descent. Yet they are still well over 100 feet high at the base of Birchmount Road. From here you can see bank swallows returning to nests dug deep into the sandy cliff face. Some 300 yards offshore armies of cormorants fly in formation, with wing tips mere feet above water. They are returning with full stomachs to their shamble of nests in the trees facing Cherry Beach.

In fact, birds are everywhere.

There’s wild trumpeter swans whose massive wings create so much thrust you can hear the rush of wind as they pass. They honk like old-fashioned car horns. We’ve seen bald eagles, and once in fall, a golden eagle. Today it’s a Cooper’s hawk with what looks like a red-winged blackbird, just a spot of diminishing red and black in its distant talons.

Farther along our kayak arouses the attention of a great egret, white as the snow to come, who quickly leaves the berm to two brown mink squeaking loudly as they chase each other in and out of the rocks.

Despite all this you never truly feel out of the city. High on the cliff face, just west of the Toronto Hunt Club, we pass a grandiose family home in mid-construction. Truly, a mansion on the hill.

On the beach, hidden under the tree canopy some 50 feet below, is a cluster of tents forming a makeshift shelter. Sitting round are four middle-aged men eating breakfast, looking out to New York some 30 miles away. The disparity looks cliché. Then someone yells “Arrrgooos.” Uproarious laughter ensues.

The R.C. Harris Water Treatment Plant rises over the last berm. This magnificent assortment of art deco buildings is distinguished by limestone and clay brick walls, frescoes, copper roofs, and skylights. The soaring arched windows are mimicked by a fountain from which the water descends, much like the expansive property that slides precipitously toward the breakwalls.

As impressive as the plant looks from Queen Street East, from water it rivals that of some of Canada’s most acclaimed buildings — the Museum of Anthropology in B.C., Habitat ’67 in Montreal, Fogo Island Inn in Newfoundland, even Douglas Cardinal’s magnificent St. Mary’s Church in Alberta. Incredible, considering its sole purpose is to produce 30 per cent of Toronto’s potable water supply.

As we round the plant’s most southwestern breakwall, a bunch of kids have negotiated the railings and are leaping into the water, their peals of laughter broken only by shouts of “cannonball!”. On shore there’s joggers, dog walkers, sunbathers, hipsters and the retired. And lots of tourists, surprised to see a clean freshwater beach in downtown Toronto.

The lake water is soothing so we stay bob with the waves offshore, chatting with like-minded paddlers who happen by. From here you can see Leslie Spit and the Toronto skyline.

Claire remembers we have Beach Hill Smokehouse barbecue in the cooler, so we turn back to one of the secret beaches for lunch.

A leisurely two hours later we’re back at the Bluffer’s launch … and heading home for pre-dinner cocktails.

It’s been a good day in Toronto.