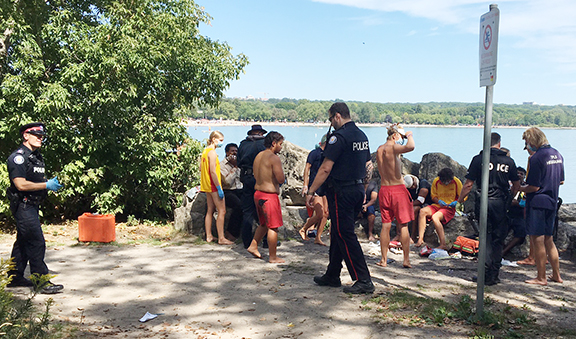 Emergency workers help some of the people who were injured in yesterday afternoon's boat crash at the far west end of Woodbine Beach. Photo by Alan Shackleton.

Toronto police are appealing to people who may have witnessed or have video of the fatal boat crash that took place off Woodbine Beach early on the afternoon of Thursday, Sept. 3, to come forward.

A 47-year-old man was killed in the crash and six other people were injured.

Just after 12;30 p.m. on Thursday, a yellow motor boat appeared to strike some rocks about 90 metres off shore and then struck the rocks at the far west end of Woodbine Beach, police said in a press release issued yesterday night.

According to police, a 46-year-old man was operating the yellow and white 20-foot bowrider motor boat when the crash took place.

Along with boat operator, there were six other people on the boat.

There were a lot of people on Woodbine Beach at the time of the crash, and police are asking witnesses, or those with video footage, to contact them.

“There were witnesses who may have spoken to media that may not have yet spoken to police, these people are encouraged to come forward,” police said.