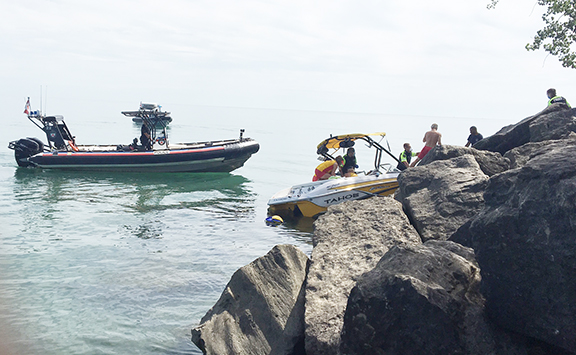 Emergency crews attend to a boat that crashed into the rocks at the west side of Woodbine Beach on Sept. 3 afternoon. Photo by Alan Shackleton.

Six people have been injured, one seriously, after a boat struck the rocks at the west end of Woodbine Beach earlier this afternoon.

Emergency crews were called to the area at approximately 12:36 p.m. for a report of a motor boat striking the rocks on the point.

Lifeguards, paramedics, firefighters and police (from both street patrol and the marine unit) were on the scene quickly attending to the people on the boat.

Toronto police reported on Twitter that six people had suffered injuries in the crash.

Just after 1:30 p.m., police said on Twitter that one of the injured had taken a turn for the worse and was vital signs absent, and was being transported to hospital on an emergency run.