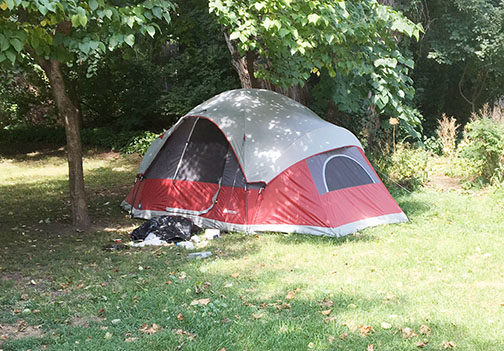 One of the two tents that have been in Ivan Forrest Gardens park on Queen Street East in the Beach in August. Photo by Alan Shackleton.

The COVID-19 pandemic exacerbated many issues the city of Toronto was facing – and homelessness has certainly been one of them.

A combination of city staff suspending some shelter work at the height of the pandemic in March and April, and limited physical distancing space in existing shelters led to a spike of encampments in parks across the city.

Residents living near Ivan Forrest Gardens and Glen Stewart Park in the Beach have on many instances contacted the city via 311 regarding encampments in the park belonging to people experiencing homelessness. City staff is often called to the area to respond to complaints as well as its own program of helping homeless people find respite and shelter.

Beaches-East York Councillor Brad Bradford said the tents “continue to be a challenge” but noted that it is important for the city and the community to find an empathetic solution.

“We have a fine line to walk between keeping the community safe, making sure the folks living in these situations are also safe, and not using unnecessary force to remove people,” he said.

Bradford added that Toronto has seen “unprecedented” numbers of people setting up encampments in parks due to the COVID-19 pandemic.

Since the beginning of the pandemic, 3,500 people have moved through the emergency shelter system in the city into temporary community centre programs, hotels, and permanent housing. That includes 1,300 individuals who have been transitioned to permanent housing to achieve physical distancing of two metres between shelter beds. And the city has opened 30 temporary facilities in addition to the 75 shelters and respites that were available before the pandemic.

“That’s a lot of capacity we’ve created, and a lot of people in the system,” Bradford said. “We want to avoid forcing people into the shelter system if they don’t want that.”

While there remains capacity for additional people, “for better or for worse, some people simply refuse,” Bradford added.

The city’s Shelter, Support, and Housing Administration (SSHA) is responsible for outreach to people experiencing homelessness under the Streets to Homes program. It works with community partners, including The Salvation Army Gateway and increased engagement with people at Ivan Forrest Gardens.

The city’s Solid Waste Management staff has also attended the sites to clean up any hazardous waste materials and garbage from the area.

“At the start of the COVID-19 pandemic, encampment clearing had not been happening due to the city’s focus on creating safe physical distancing within the shelter system,” a statement from from SSHA read.

Work with people living in encampments restarted on Apr. 29, and as of Aug. 26, 790 people have been moved from encampments to safer spaces inside, leading to 52 encampments across the city being cleared.

Demand for transitional homes from people experiencing homeless has also increased in response to the pandemic.

Most recently at Ivan Forrest Gardens, staff attended three times the week of Aug. 24. On the Aug. 29/30 weekend, one person agreed to work with city staff and move into a hotel program.

Three additional people remained onsite in encampments at Ivan Forrest Gardens earlier this week as they had declined city services.

“If they continue to decline, we’ll work with Parks staff to post and clear the site within the next week,” Bradford said.

His office confirmed on Wednesday, Sept. 2, that the remaining tents in Ivan Forrest Gardens had been removed, with city staff assisting one of the four people who were encamped in the area.

The remaining three declined city services, Bradford’s office said, and they have not been see since city staff started monitoring the area daily.

Streets to Homes outreach staff and funded agencies work with individuals to conduct wellness checks and help them access shelter and other supports.

But, if individuals in encampments refuse support, a notification of tent clearing is issued.

The city believes the solution lies in cooperation between city staff and people experiencing homeless. Since mid-march, it has moved 1,500 people who were homeless into permanent housing through a combination of housing allowances and rent-geared-to-income units.