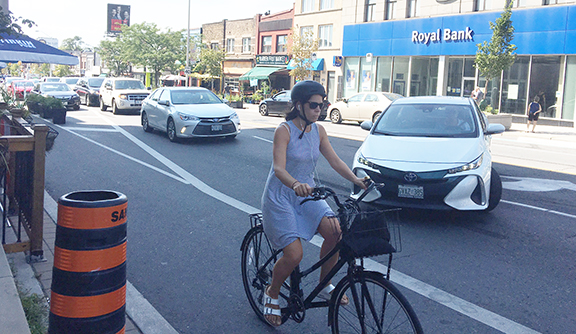 A cyclist heads east along Danforth Avenue near Woodbine Avenue in the newly created bike lanes. Photo by Alan Shackleton.

The last few months have resulted in extremely challenging times. Working in the health care sector as a family physician, I have experienced a wide range of emotions in response to the current reality. Toronto’s decision to create a protected bike lane along the city’s main east-end  thoroughfare, Danforth Avenue, is a welcome cause for celebration and a positive outcome in this difficult time.

A protected space has been created that safely separates cyclists from automobiles by means of cement curbs and flower-filled planters. This ambitious project, made possible by local advocacy work and city council, runs all the way from Broadview Avenue to Dawes Road.

The new Danforth bike lane will bring a whole range of benefits – both to the neighbourhood and the city at large.

As a physician, safety is of great importance to me. By having concrete barriers to physically separate cyclists from car traffic, the Danforth lane makes the road safer for both cyclists and cars. Interestingly, this project also makes life safer for pedestrians by creating shorter crossing distances and offering a buffer between people walking on sidewalks and moving cars.

Encouraging people to use active transportation is essential not only due to the epidemic of diabetes, obesity and hypertension which faces Canadians, but also for mental health and wellness.

Concerns around safety are the primary reason my patients tell me that they do not cycle in the city. Increasing safety is therefore a key factor in allowing people to become more physically active which is of great benefit to their health.

The new lanes will also be helpful for essential employees – like doctors and nurses –who are travelling from this area to their workplace.

As Mayor John Tory has said, protected bike lanes “help safely get our front line health care workers where they need to be.” If you’re a health professional who lives in the Pape and Danforth area and works at a downtown hospital you haven’t had a safe cycling route. Now you can ride along Danforth to the Bloor viaduct, take the Bloor bike lane to University and there get the new southbound lane to your office.

It has also been said that bike lanes are good for local businesses. Toronto’s Centre for Active Transportation studied the economic impact of putting pilot bike lanes on Bloor Street and found that, “Monthly customer spending and number of customers served by merchants both increased on Bloor Street during the pilot.”

Everyone knows COVID-19 has taken a toll on Danforth restaurants and shops, significantly reducing their income. We need to safely bring folks back to this street – and cycling infrastructure can be part of the solution, offering another way for stores and customers to connect.  The project also creates plenty of bike parking, offering people lots of space to store their bike while shopping.

Polling done this year by EKOS Research found 79 per cent of Toronto residents support the building of protected bike lanes. But that high number isn’t surprising: residents are worried about road safety and want the city to take action. In fact, EKOS found that road safety is a concern for 88 percent of Torontonians.

Finally, we can put bike lanes on Danforth without sacrificing other things we want on the street. The roadway is very wide. There is still be plenty of room for the TTC’s night bus, private cars, parking and even restaurant patios.

It’s not often that a single project has the potential to enhance road safety, increase physical and mental health, promote public health and boost businesses. This is a step in the right direction and hopefully will help create a safer and stronger biking culture in the city.