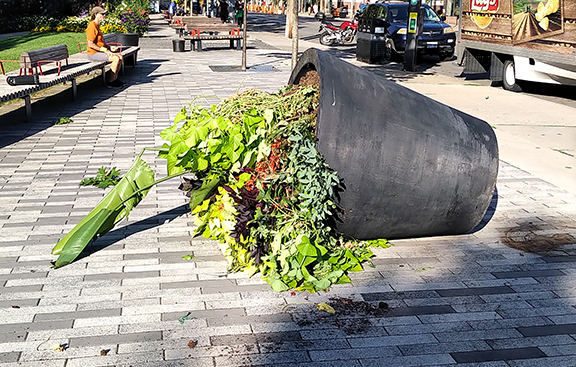 The City of Toronto is looking into an incident from the weekend in which planters belonging to the Park's Department were overturned near Kew Gardens park. Photo by Norma Meneguzzi Spall.

An investigation is underway after several large flower pots displayed along Queen Street East in the Beach were toppled over on Saturday, Aug. 29.

Some residents saw on the Sunday (Aug. 30) morning that the flower pots had been tipped over at Kew Gardens park and Queen Street East, near the Toronto Public Library – Beaches Branch.

The flower pots belong to the City of Toronto and serve as decor for public space in the area.

Beaches-East York Councillor Brad Bradford is working with the city to investigate.

Typically, cases of vandalism or mischief like this are reported to the city via 311.

The vandalism was on City of Toronto Parks Department property and it’s not a police incident – though Bradford is double checking with Toronto police to be sure.

“It’s incredibly unfortunate to see public property damaged in this way, not least in space as public and meaningful as Kew,” Bradford said.

“These are our shared spaces and it’s upsetting to see them treated this way. I hope we can get the planters back in place to enjoy the last stretch of the summer.”

The Beach Village BIA also owns several urns and flower pots in the area. Executive Director Anna Sebert said such vandalism has been a common occurrence.

“This has happened before with our large flower pots,” she said. “Not sure who’s doing it or why, but unfortunately this is happening often.”

Sebert mentioned last year that when the BIA place a large Christmas tree in the area, the sandbags which held it in place were stolen.

The city’s maintenance department has since cleaned up the mess from the tipped over flower pots.