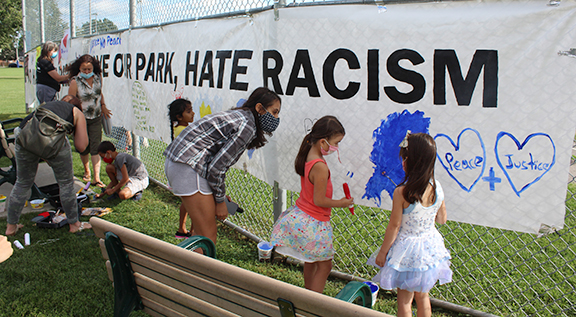 A large number of East Toronto residents gathered in Dentonia Park on Saturday, Aug. 29, to make a stand against racism.

The United Against Hate – Reclaim Dentonia Park Community Art Rally took place in the park near Danforth and Victoria Park avenues between 4 and 7 p.m. The rally heard a number of speeches and saw residents create signs, artwork and messages which were placed on a fence in the park.

It was organized in response to an incident in the park in late June in which a Black man and white woman were allegedly assaulted and threatened by two white men after a dispute over an off-leash dog escalated. Two men are facing charges in connection with the incident.

Standing close to where the incident took place, Austin said that the rally was important to help build a sense of community in the Dentonia Park area and to show that racism will not be tolerated. He said after the incident took place, he and his partner Candice waited for about half an hour for police to arrive and no one in the park came to help them.
“What we saw was a community that was broken, and racism played a big part in that,” said Austin.

“We wanted to do something that would bring people together,” he said of Saturday’s rally.

It was organized by Reclaim Dentonia Park with the host groups is also being supported by the United Steelworkers National, District 6, and the USW District 6 Human Rights Committee, the Coalition of Black Trade Unionists, and #Beachers for Black Lives.

Austin said one of the things that will be really nice about all the artwork and messages against racism now on display in Dentonia Park is that he and Candice will be able to see them from their apartment.

Most frustrating for Austin, and what sparked an earlier protest in front of the 55 Division police station on Coxwell Avenue, was that he said police did not take the incident seriously at first and he believes that was because he is Black. It was not until after the protest that two people were charged in connection with the incident. Speaking on Saturday, Jahangir said that police need to treat everyone equally when responding to calls for help and not take the side of the white person over the person of colour.

“We stand together with our brother and sister, and we want justice for them and police to say they are sorry,” she said. “The police need to treat everyone equally. Crime is not Black, white or brown. Everyone should get punishment if they do a crime.”

Berns-McGown pointed out that the fight against racism is ongoing in a number of neighbourhoods in Beaches-East York. Along with the Dentonia Park incident, she also cited the placing of a noose at the hospital construction site in East York, and the calling of police to a park in the Beach about a Black child playing a toy gun.

“We have been fighting racism here and there’s no room for nooses, not charging people when people have been assaulted, and calling the cops on Black child playing,” she said. “We will keep taking up space, and we will let the racists know they cannot act on their racist ways here.”

Dhanani, wearing an East York vs Everybody T-shirt, said that being silent when encountering racism is not acceptable.

“Everywhere we see racism, we have to call it out. Being silent won’t protect us. Know that you could be the target one day, and you will want people who are brave and story and will stand up for what is right.

“We have to stop the politeness and being so nice. We have to stand up against intolerance.”