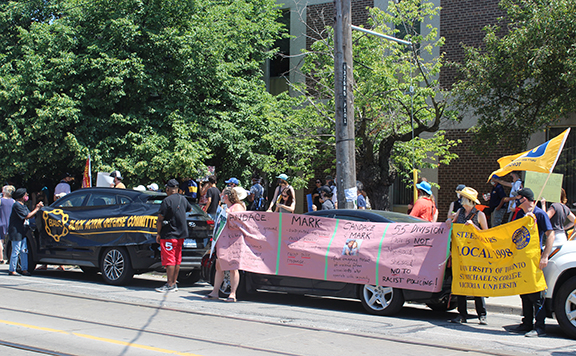 A large crowd took part in a protest against racism and police inaction in front of the 55 Division station on Coxwell Avenue on the afternoon of Monday, July 6. The protest was held in connection with an incident that took place in late June in Dentonia Park. A United Against Hate - Reclaim Dentonia Park Community Art Rally is planned for this Saturday, Aug. 29.

The rally is being held in the wake of an incident in the park in late June in which a Black man and white woman were allegedly assaulted and threatened by two white men after a dispute over an off-leash dog escalated.

Two men are facing charges in connection with the incident.

This Saturday’s event takes place from 4 to 7 p.m. at the park, which is located at 80 Thyra Ave. in the Dawes Road and Danforth Avenue area.

“Help reclaim Dentonia Park – join us to make art that speaks out against hate!” said the Facebook post letting the community know about the rally.

Those attending are encouraged to bring pre-made signs and art work to surround the park with.

“We will surround the park with our messages of Unity Against Hate and Love for Survivors of Racist Violence.”

The rally is organized by Reclaim Dentonia Park along with the host groups and is also being supported by the United Steelworkers National, District 6, and the USW District 6 Human Rights Committee, the Coalition of Black Trade Unionists, and #Beachers for Black Lives.

“Dentonia Park is located in Dish With One Spoon Treaty Territory, and is in one of the most diverse neighbourhoods in the city,” said the Facebook post. “Crescent Town features people from around the world, with significant numbers of Bengali, Urdu, Cantonese, Amharic, Tagalog, Nepali, Tamil, Mandarin, Telugu and Farsi speakers.”

Those taking part in the rally, including creating artwork, are reminded to adhere to safe social distancing requirements and safety protocols to help stop the spread of the COVID-19 virus.

“Art supplies, water and snacks will be available but please bring and wear your own mask if possible, and remember to physically distance.”

For more information on the incident in June and on the charges, please read: