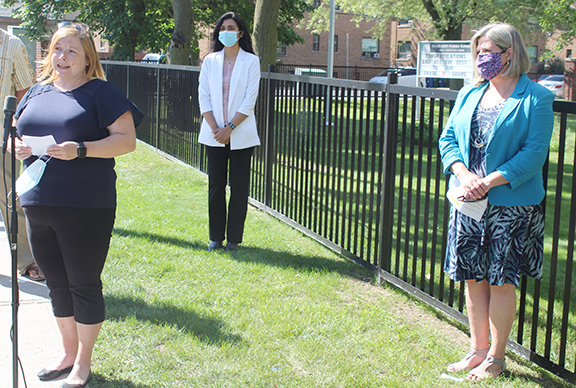 The province’s plan to send students back to school has been constantly changing as parents, teachers, and officials raise their concerns.

As of Friday, Aug. 21, the Toronto District School Board (TDSB) was planning to start school for students on Sept. 15, one week later than had earlier been planned. Start dates for students will also be staggered over Sept. 15, 16 and 17, according to the latest plan by the TDSB which was approved late in the day on Aug. 20.

Other aspects of the TDSB’s plan will be the mandatory wearing of face masks for students in all grades to stop the spread of the COVID-19 virus, smaller class sizes and physical distancing protocols. There will also be options for online learning.

The TDSB will be dipping into its reserve funds to cover some of these additional costs, including the hiring of more teachers to help reduce class sizes.

Last week, Beach Metro News looked into the concerns of local trustees and parents as the new school year approaches. As the situation was constantly changing, the interviews in this article took place before the updated plan was introduced.

“This whole experience has been akin to building a plane while flying it…The conditions are evolving,” said Toronto-Danforth TDSB trustee Jennifer Story.

Michelle Aarts, the TDSB trustee for Beaches East-York, said that the constantly changing situation has “thrown the boards for a loop.”

She said that the direction given on July 30 by the province for elementary students to go back full time in regular class sizes was unexpected and not what they had planned for.

“I was shocked, it’s a mix of frustration and shock. The frustration comes from the fact the ministry has made our staff do phenomenal amounts of work, and then pull the rug out from under them multiple times,” said Aarts.

Angela Kennedy, the Toronto Catholic District School Board trustee for Beaches East-York said that her board’s plan for the return to school is similar in a number of ways to the TDSB’s plan.

“Things are changing on an hourly basis practically and I see that our senior staff are working day and night. The ministry is working hard, Public Health is working hard. Everyone is working hard to do the right thing,” said Kennedy.

There are many unknown components to the province’s plan which have raised concerns, including what transportation will look like, how recesses and lunch breaks will be planned, along with entries and exits into school.

Story’s thoughts on the plans highlight the need for funding to have the space to allow for social distancing and to hire more staff.

“I’m disappointed that the provincial government hasn’t put more resources into supplementary teachers and into securing additional spaces so that we can minimize class sizes and spread kids in a class out,” said Story.

Story also described the current funding for infrastructure to enhance health and safety in schools as “woefully inadequate.”

“Even if we were to get a massive and immediate influx of cash, it would take time to execute. There’s no way all that work could be done for September,” she said.

Aarts said that instead of running a balanced budget this year, the board will be borrowing against reserves for approximately $30 million, even if more funding is announced.

“Right now those reserves are paying for PPE for both staff and students, extra caretakers, cleaning supplies, and as much additional staff as we can hire,” said Aarts.

She also cited the lack of funding for infrastructure and the need for better ventilation in schools.

Kennedy said she hopes that class sizes in her board will be reduced to 15, and that her board is spending money from their reserves on hiring more staff.

“At this point in time, I think a full return is essential for elementary students. I think it’s important for the mental health of the parents and the students,” she said.

Kennedy, who has been a nurse at Michael Garron Hospital for more than 50 years, thinks the health and safety advice from Toronto Public Health and the province has been good so far.

“I’m really glad to see our politicians that are listening to the scientists and the doctors. It seems like the media is really respecting the epidemiologist advice and the infection control specialists…I feel quite confident in the advice that we’ve been given,” she said.

This money will come from boards’ reserves, in addition to $309 million supplied by the provincial government.

Story, Aarts, and Kennedy all said that they have had many parents reach out to them worried about the health and safety of their children, and about the unknowns of how going back to school will work.

“On one side we have parents who need to return to work and needing their kids to be safe, social, and learning…They need that coverage and support. On the other side is a basket of concerns about a safe return to school,” said Story.

Kennedy said that the main concern she hears from parents is about the size of classes.

“I’m getting all kinds of messages from parents…We will find that the main thing is that parents want a cohort of 15. They don’t want the size to be 30 or 20,” said Kennedy.

Beaches East-York MPP Rima Berns-McGown said that the Ministry of Education is dealing with the students going back to school “terribly.”

Berns-McGown said that some parents don’t have the luxury of working from home or to help their children with digital learning.

She also said that the plan is putting both students and parents in a terrible position.

She said that she thinks the provincial government doesn’t want to spend the money needed to hire extra staff, make class sizes smaller, and rent out additional space.

“But what my point is, is that it’s going to end up costing our economy. So they’re actually going to end up losing fiscally as well as in terms of what it means for our health and kids’ education,” she said.

Berns-McGown said that parents don’t know what to do in the face of so much uncertainty.

“They’re really panicked. They don’t know what to do to solve this problem, they want their kids to be educated…Trying to educate your kids while you’re trying to concentrate on your own work took a huge toll on people, and it didn’t work for many people,” she said.

She said that along with the health of students, parents are concerned about their children contracting COVID-19 at school and exposing immunocompromised or older people in the household to the virus.

“There’s no plan, it’s a disaster. And now we’re two weeks away and it’s just a mess,” she said.

Chair of Secord Public School Council and parent Yona Nestel said she was outraged by the plan as it stood prior to Aug. 20.

“The province has billions of dollars of reserve funds it’s sitting on…This is not the place to cut corners with children’s safety,” she said.

Nestel is concerned about her daughter who is due to start junior kindergarten this fall.

“Am I really supposed to send this tiny little person who has very little understanding about things like social distancing? This is her first experience in an institutional setting, and this is the demographic they really want to cut corners on?” she said.

Nestel said that she’s worried about what the school day is going to look like for her children and if it will be a warm and welcoming environment.

“I care about their psychosocial wellbeing. I’m sending them back to school because they need to be together with peers…if school is going to be a scary, emotionally sterile place, there’s no point in me taking the risk of sending them,” she said.

Nestel said that the safety of children in schools is not about money, but rather of “political will.”

She said that she feels for the trustees that are doing their best despite the uncertainty and limited resources.

“I also want to say I’m proud of how parents and educators came together to do advocacy. I’m part of a group called Ontario Parent Action Network, and they’ve been doing some amazing grassroots advocacy work,” she said.

Parent Jennifer Sheridan said in an interview last Wednesday that she will not be sending her daughter back to school for Grade 1 at Oakridge Public School.

“We’ve decided with a heavy heart not to, but it doesn’t feel like we have a lot of choice,” said Sheridan.

She said that her daughter, who is on the autism spectrum, will be missing out on routine and opportunities for socialization with other children.

“I’m very lucky that I can be with her and give so much of my attention to her. But that is not a typical experience, and I can’t make up for peers, and how valuable actual teachers who are trained to do the job are to her life,” she said.

Sheridan said that remote learning has its own share of challenges, referencing her experiences in the spring with 30 kindergarteners trying to “operate at the same time like a Google Meet.”

For more information on the most current back-to-school plans for the TDSB and the TCDSB, please visit  www.tdsb.on.ca  or www.tcdsb.org/FORSTUDENTS/back-to-school/Pages/Default.aspx respectively.