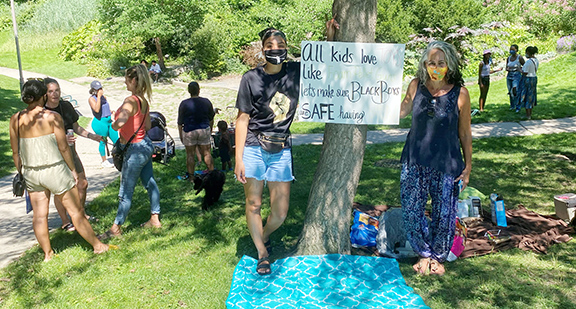 Sahvana Downes, left, and Beaches-East York MPP Rima Berns-McGown hold a sign during a gathering at Ivan Forrest Gardens park protesting racism and defending the rights of all children to play safely and free from discrimination on Aug. 14. The sign reads: ‘All kids love toys like foam pellet guns. Let’s make sure Black boys are safe having fun.’ Photo by Susan Legge. Inset photo: The Love in the Park: Justice for Black Children Dance Rally took place on the afternoon of Aug. 22 at Ivan Forrest Gardens Park.

A number of gatherings have been held in Ivan Forrest Gardens defending children’s right to play after someone called 911 on a Black child who was playing with a toy gun in the park earlier this month.

Police responded to the 911 call in force as it came in as a person with a gun in the park near Queen Street East and Glen Manor Drive.

When officers arrived they quickly realized that in fact it was only a group of children playing with toy Nerf guns.

At a gathering held on Aug. 14, dozens of residents showed up at the park to protest against racism and to support children being able to play without fear or discrimination.

The Aug. 14 gathering was organized by local resident Sahvana Downes.

“I know that the police did show up. Luckily, they were able to access the situation quickly. I don’t believe things escalated to a point of violence, but none-the-less, the fact of the matter is in 2020 calling the police on an innocent Black person is an act of violence and when you do that against children, it’s absolutely unacceptable and it’s important that the community comes together and makes that clear,” Downes said at the Aug. 14 event.

On the afternoon of Saturday, Aug. 22, a dance rally was held at Ivan Forrest Gardens hosted by #Beachers for Black Lives. The  Love in the Park: Justice for Black Children Dance Rally was held to remind residents that the use of this public park is everyone’s right.

“This was a racist crime that was directed towards an 11 year old boy in our very neighbourhood,” said the Facebook post about the dance rally. “Enough is enough!  We will not tolerate racism towards our Black Children in this community…

“Together we will dance as a community to demand safety, justice for our Black Children, against anti-Black racism and to celebrate Black Joy and Black music.”