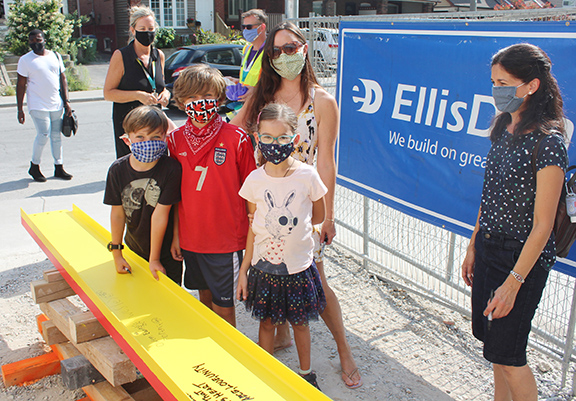 Wesley, Owen and Florence signed their name to the Unity Beam, the final construction beam in the expansion of East York's Michael Garron Hospital, during a community event on the afternoon of Aug. 24 at the hospital. Inset photo; Registered Nurse Karen Butler has been working at the hospital for 36 years and was one of the first people to sign the beam. Photos by Alan Shackleton.

Community members, staffers and construction workers came out for a special ceremony to sign the final beam of the Michael Garron Hospital (MGH) expansion project on the afternoon of Monday, Aug. 24.

Hospital president and CEO Sarah Downey said the beam-signing celebration event was a continuation of the close relationship MGH has with the East Toronto community.

“It was vitally important to do this signing with our community,” she said. “Our community has really rallied behind us.”

Downey said that community support was especially evident after a racist incident took place within the hospital expansion construction site on June 12. Posters and messages against racism and hate quickly were put onto the construction site’s wall on Sammon Avenue.

Images from the art on the wall be put onto the final construction beam, which is being called the Unity Beam. MGH has partnered with The Aboriginal Healing Program community to symbolically name the beam the Unity Beam.

The Unity Beam was painted red, black, white and yellow by Elder Little Brown Bear and members of the Aboriginal Community. It will also be adorned with the signatures from community members anti-racism art.

Downey said the community’s reaction to the racist incident was much needed and “lifted the souls” of hospital staff and administration who were so hurt by what had happened at the construction site.

She said it was further proof that “this hospital is owned by our community.”

The Unity Beam will be lifted into place on top of the Ken and Marilyn Thomson Patient Care Centre later this week, and will be installed within the mechanical penthouse located on the roof. Registered Nurse Karen Butler, who has worked at the hospital on Coxwell Avenue for 36 years, was one of the first people to sign the Unity Beam on Monday.

“I’ve worked all of my years in nursing here,” she said. “This is the place that first welcomed me and offered me a job, and it’s been the best job in the world.”

Butler works in the maternity department and has always enjoyed being at the hospital and being with the people she works with.

She will, however, be retired before the new centre opens in 2022.

“I’ll be coming back to see the new facility. I’m a little bit jealous of everyone who will be working in this new environment.”

The new centre will feature more than 80 per cent private rooms, wide hallways and the most modern facilities and equipment.