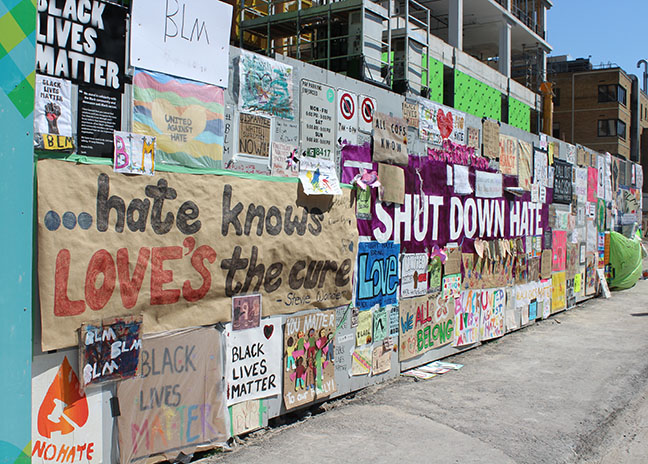 Artwork created by the community against racism earlier this year will be included on the final beam of the Michael Garron Hospital's extension project. A signing ceremony for members of the public is planned for Monday, Aug. 24, from 4 to 6 p.m.

Local residents are invited to put their name on piece of history during a Beam Signing Ceremony planned for East York’s Michael Garron Hospital on the afternoon of Monday, Aug. 24.

The ceremony will take place from 4 to 6 p.m. at the entrance to the hospital’s K-wing at 650 Sammon Ave.

The beam, which is the final structural beam for the hospital’s extension project, will be lifted into place on top of the Ken and Marilyn Thomson Patient Care Centre later this week. Construction began on the extension in April of 2018.

For the signing ceremony, the beam has been placed in an accessible location for all residents who wish to put their signature on it.

This final beam will be installed within the mechanical penthouse located on the roof of the new Centre.

MGH has partnered with The Aboriginal Healing Program community to symbolically name the beam the Unity Beam.

This is a significant milestone for Michael Garron Hospital’s redevelopment project as it signals the completion of the building’s steel structure and gives the hospital the green light to continue forward with the project’s interior works.

“Signing the beam will declare one’s support for the organization and the care it provides to the East Toronto community and solidify one’s place in the legacy and history of Michael Garron Hospital moving forward,” said the hospital in a press release.

Those taking part in the beam signing are reminded to adhere to social distancing requirements and wear a mask within six feet of others.

Along with staff and community signatures, the Unity Beam will be painted by Elder Little Brown Bear and members of the Aboriginal Community and adorned with art created as part of the “community artivism” event in June. The “artivism” took place in response to a racist incident that had occurred at the construction site earlier this year.

“Having this artwork permanently applied to the beam will ensure the community’s positive energy and voice is brought into the structure and the building continues to be a place of healing, care and inclusivity for generations to come,” said the hospital’s press release.