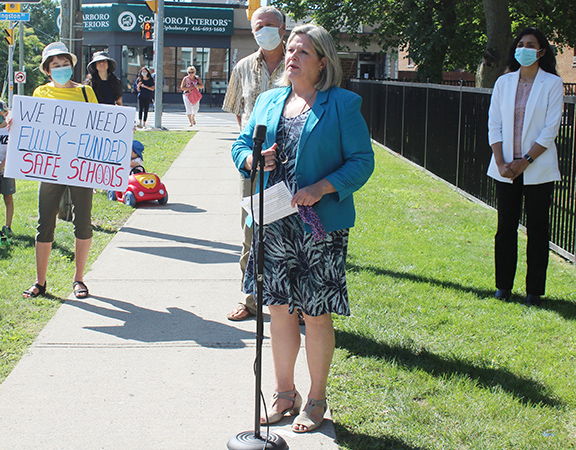 She said parents and educators do not have any confidence in the plans being presented by Premier Doug Ford and Minister of Education Stephen Lecce, and criticized them for not putting in the work or providing the funding needed for a safe back-to-school plan.

“Doug Ford is cutting corners province wide with a bargain-basement scheme, putting the start of school in jeopardy,” said Horwath, pointing out the expected start date for schools of Sept. 8 is just over two weeks away.

“Mr. Ford and Mr. Lecce did not do the work. This does not create a sense of confidence. We should not have to be scrambling like this at the last minute” she said

Neither Sheridan nor Perozak will be allowing their children, who are starting Grade 1, to return to class as they do not feel the current plans are safe.

Perozak, who is a parent from Danforth Gardens Public School, said he was “upset and angry” with the situation that led to his decision to have his child stay home and learn online instead of going to classes in school.

“Money suddenly comes forward a week before schools are supposed to open? This parallels the nursing home crisis. What would I be sending my kids into?” he said.

“It’s confusing and there are mixed messages. They are not prepared and my kid’s not going.”

For Sheridan, the decision to keep her daughter home from Oakridges Public School was an agonizing one.

Her daughter is on the autism spectrum and was thriving over the last two years with the socialization opportunities made available to her by attending Junior Kindergarten and Kindergarten at Oakridges.

“We have decided reluctantly that we cannot return her to school with the current plan,” said Sheridan. “It is just not safe for kids. There’s no way to distance with 25 kids in a classroom.”

Horwath said the province is forcing parents to “make a choice to keep their kids, families and extended families safe and there is no extra support for parents.”

“This is shameful. They really messed up in a big way.”

She was also critical of the attacks by the provincial government against teacher unions and school staff unions.

“They are once again trying to demonize the unions,” said Horwath. “This is where our kids learn. Don’t blame the union because it is your favourite whipping post. It is just shocking to me that the Premier does not seem to get it.”

Begum said in an interview with Beach Metro News after the press conference that safety does not seem to the priority of the province’s back-to-school plans.

“Premier Ford and Minister Lecce have made children’s safety an afterthought,” she said.

“I think we need the Minister to step up, take some bold steps and do the right thing and take this seriously.”