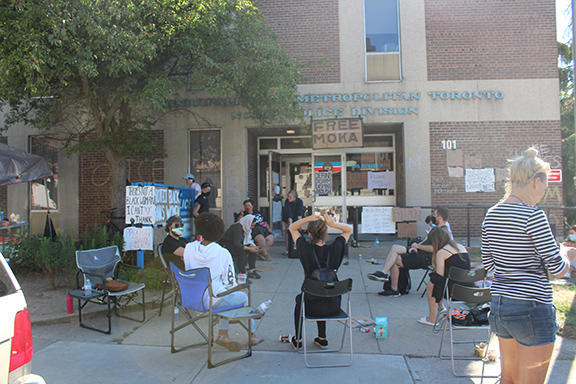 Protesters outside 55 Division on the morning of Friday, July 31, are calling for the release of a person they say was wrongfully arrested yesterday by officers in 14 Division. Photo by Alan Shackleton.

A protest in front of the 55 Division police station at Coxwell Avenue and Dundas Street East on the morning of Friday, July 31, is demanding the release of a person arrested and charged the previous day.

The person charged, who is a Black trans woman, was wrongfully arrested by the police, the protesters said.

Moka Dawkins, 30, was arrested on the afternoon of July 30 in the College and Bathurst streets area by officers with 14 Division, and charged with assault, uttering threats of bodily harm and failing to comply with probation, said a press release issued by Toronto police at 9:35 p.m. last night.

Protesters had first gathered at the 14 Division station to call for Dawkins’ release. She was later transferred to 55 Division, and protesters have been outside the station since approximately 2 a.m. today.

“She has been illegally imprisoned,” one of the protesters outside 55 Division told Beach Metro News this morning. “She was arrested on false charges. Police have been weaponized against her. The fact she was a Black trans woman was used by the person who made the call (to police).”

According to the police press release, officers were called to the incident at approximately 1:35 p.m. yesterday for an alleged “assault and threats” between “two individuals which began as a dispute in a residence and escalated.”

Protesters said the person who called the police used them as a “weapon“ and “a personal vendetta squad” against the accused.

More information on this incident from the protest organizers can be found on Instagram at https://www.instagram.com/notanotherblacklife/?hl=en

Dawkins was scheduled to appear at College Park Court this morning.