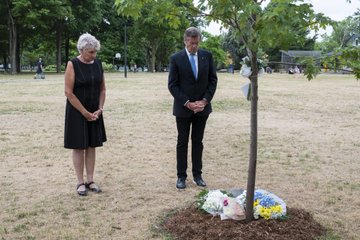 Due to COVID-19 restrictions on the size of gatherings, a small and private ceremony was held on the morning of Wednesday, July 22, in Withrow Park to observe the second anniversary of the Danforth Shooting. Mayor John Tory and Toronto-Danforth Councillor Paula Fletcher laid flowers on behalf of the City of Toronto. Photo: City of Toronto.

Members of the families of Reese Fallon and Julianna Kozis were joined by Mayor John Tory and Toronto-Danforth Councillor Paula Fletcher at a ceremony this morning to mark the second anniversary of the Danforth Shooting.

The private ceremony, which was restricted in numbers due to the city’s COVID-19 protocols, took place just after 9:30 a.m. on July 22 at the north end of Withrow Park.

The mayor and councillor, along with Fallon’s parents and Kozis’ aunt and uncle, laid flowers at the memorial trees planted in the park to remember the two young women who were killed in the shooting on the night of Sunday, July 22, 2018 along Danforth Avenue near Logan Avenue.

The incident saw 13 other people wounded, and the shooter killed himself.

“I know that the past few months haven’t been easy and the pandemic has taken a toll on many,” said Fletcher in a statement on today’s memorial. “But our community is strong and resilient, and we always support each other in times of need.”

While this year’s ceremony could not feature a large public gathering, residents are invited to visit the park today and lay flowers and reflect. Also, the TORONTO sign at Nathan Phillips Square will be dimmed tonight in memory the shooting victims.

The City of Toronto is also making available a Virtual Commemoration web page for people to visit which will feature video of today’s ceremony. It can be accessed at https://www.toronto.ca/city-government/awards-tributes/tributes/commemoration-of-the-danforth-tragedy/

At this morning’s ceremony, Tory talked about the impact the shooting had had on the entire city and how important it was to show support for the victims.

Along with showing support for the families of the victims, Tory also remembered the heroic work of the first responders and ordinary citizens who helped out on the Danforth in the immediate aftermath of the shooting.

Toronto Police Chief Mark Saunders echoed those sentiments in a statement he released this morning.

“Two years ago today, Torontonians were devastated by a shooting on the Danforth that left 18-year-old Reese Fallon and 10-year-old Juliana Kozis dead, 13 others injured, and a community in mourning,” said Saunders.

“While two years have passed, I am certain the memories are still vivid not just for those who were most impacted but also for the many first responders who rushed to the scene that day. As Chief, I am proud of the Toronto Police Service members who attended the call, comforted victims, located the suspect, and worked diligently to investigate that unspeakable act of violence. I am also proud of how this city responded and came together in the days and weeks after to show strength and support. May we continue to gather that strength and support as we take this moment to reflect on July 22, 2018.”

Fallon, who was going to be taking nursing at McMaster University starting in the fall of 2018, was active in helping the community and standing up for social justice and was a member of the Beaches-East York Young Liberals.

Nathaniel Erskine-Smith, who is the Liberal MP for Beaches-East York, said Fallon was “smart, kind and funny.”

“As an active member of our Young Liberals, Reese saw politics as a way to spend time with friends, to make new friends, and to make a difference,” said Erskine-Smith.

A page on Erskine-Smith’s website pays tribute to Fallon, and includes stories and thoughts from her friends and family. The page can be viewed at  https://beynate.ca/reese-fallon/