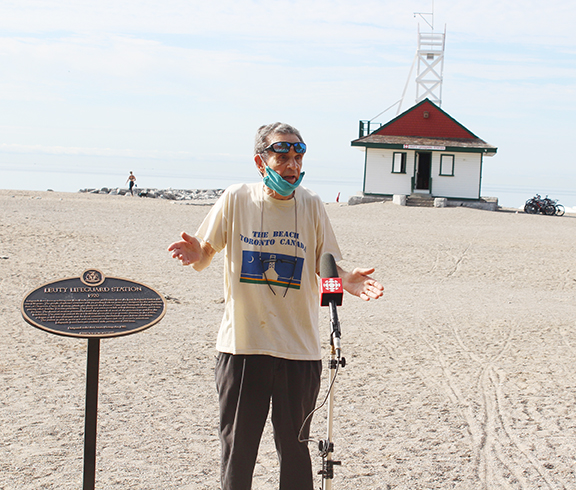 Beach historian Gene Domagala speaks on Tuesday at a small celebration to mark the 100th anniversary of the Leuty Lifeguard Station. Inset photos: Lifeguards working at the station this summer help local dignitaries cut the ribbon to mark the 100th anniversary; a coffee cup that was sold to help raise funds to save the station back in the 1990s. Photos by Alan Shackleton.

The Leuty Lifeguard Station’s 100th anniversary was celebrated by a small group of Beach dignitaries on the morning of Tuesday, July 21.

The ceremony, which had to remain small due to COVID-19 restrictions, was held on the Boardwalk at the foot of Leuty Avenue in front of the plaque recognizing the building of the station in 1920.

A much larger community celebration to mark the 100th anniversary will be held next summer, said Bradford.

“We’re going to have a big beach party in 2021 to celebrate the Leuty,” added Visconti.

Bradford added that residents are invited to share their Leuty stories, photos, paintings, videos or anything else related to the station over the next year to an online portal that has been set up in advance of next summer’s bigger celebration of the 100th anniversary. The portal can be accessed at https://www.kudoboard.com/boards/eULS1glr

Though subdued and limited in numbers, Tuesday’s event saw a number of speeches including from former and present lifeguards. A group of lifeguards working out of the station this summer helped cut the ribbon to officially mark the 100th anniversary. Jakobek, who was a lifeguard at the Leuty station in the late 1970s, told the crowd he had many fond memories of working there including being on the tower and working the “rookie beach” at the foot of Hammersmith Avenue.

Jakobek added that as Toronto changes and the buildings and landmarks that were part of its past disappear, it’s important to remember and maintain the buildings that hold special places in the hearts of the community.

“Of all our landmarks, nothing has been as much photographed and loved as this building,” he said.

The word iconic was used a lot to describe the Leuty Lifeguard Station at Tuesday’s ceremony.

It does indeed hold a special place in the community, but residents had to fight to save it in the 1990s as it was on the verge of being torn down due to its poor condition and precarious location.

Domagala pointed out that it has been moved four times and raised up higher since it was first built to protect it from flooding, erosion and other threats.

The Save Our Station (S.O.S.) campaign was quickly started by the community to save the station from demolition in the 1990s, and it raised a huge amount of money and public attention for the cause. Domagala brought an S.O.S. coffee cup, with was among the items sold to raise funds to save the station during the campaign, to Tuesday’s ceremony.

The Leuty station was designated as a protected structure under the Ontario Heritage Act in 1993.

“This is an icon and a part of the history of our neighbourhood,” Domagala said. “We started the movement to save the station, and all kinds of people got involved…I hope it stays around for another 100 years.”

The Leuty Lifeguard Station was one of three similar stations built by the Toronto Harbour Commission in 1920. The others, which have been torn down, were at the Humber River (Sunnyside) and the Western Channel. A similar lifeguard station was later built at Cherry Beach, and that is also still standing.

The Leuty station was originally called the Scarborough Beach Station, but it soon became known to locals and the rest of the city as the Leuty due to its location near the foot of Leuty Avenue.

It is estimated that lifeguards working out the Leuty station have saved more than 6,000 people from drowning over the past 100 years.

The plaque by the Boardwalk in front of the Leuty Life Station reads:

“Lifeguards have been watching over Kew Beach swimmers and boaters from the Leuty Lifeguard Station for over 100 years. The simple clapboard structure with its rooftop lookout tower was designed by the architecture firm of Chapman, Oxley & Bishop, which also designed the Princes’ Gates and Sunnyside Bathing Pavilion, among other famous Toronto structures. The beach was once crowded with buildings, vendors, and boats for hire. The threat of erosion eventually forced the removal of most of the structures to stabilize the beachfront. The station is one of the few buildings from this era to remain. Starting in the 1990s; it began to fall into disrepair and the local community fundraised to save it from demolition. The station is still in active use and it is one of only two left on Toronto’s waterfront. Lifeguards based here are credited with saving over 6,000 lives.”