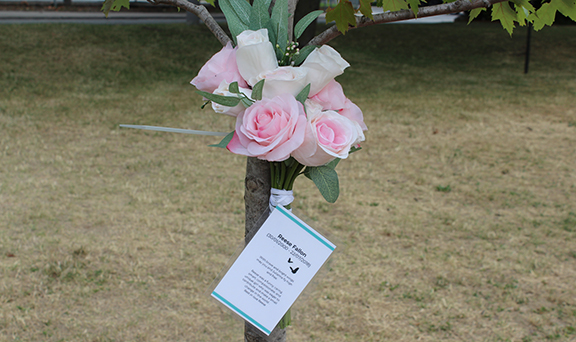 A private ceremony will be held on the morning of Wednesday, July 22, to mark the second anniversary of the Danforth Shooting that took the lives of Reese Fallon, 18, and Julianna Kozis, 10, and wounded 13 other people.

Mayor John Tory will attend along with Toronto-Danforth Councillor Paula Fletcher and members of the Fallon and Kozis families at 9:30 a.m. in Withrow Park.

The gathering is being kept small and private due to the City of Toronto’s COVID-19 protocols which limit the number of people who can gather together.

The ceremony will be posted on the city’s YouTube channel later in the day on Wednesday.

On Wednesday evening, the TORONTO sign in Nathan Phillips Square will be dimmed to remember the victims of the shooting.

Last year, two public memorials to mark the shooting’s first anniversary drew large crowds at both Withrow Park on the Sunday before and also on July 22 at Alexander the Great Parkette.

An Upper Beach resident, Fallon had just graduated from Malvern Collegiate earlier that year and was out with friends celebrating a birthday party and sitting in Alexander the Great Parkette when the shooting started.

Kozis, a Markham resident, was in a restaurant on Danforth Avenue with her family at the time of the shooting.

Ken Price, whose daughter was out with Fallon and friends that night and was wounded in the shooting, said the families of the victims appreciate the support they have received from the community over the past two years.

“We’ve had wonderful community support,” said Price. “We appreciate all the memorials and actions taken by the Danforth community.”

He said that this year’s memorial ceremony would have been much larger if not for the COVID-19 restrictions in place to stop the spread of the virus.

“As it is, it can only be a small gathering of 10 people. The mayor will be there to speak with the families,” said Price.

The Danforth Shooting took place on the night of Sunday, July 22, 2018 and was concentrated in the area of Logan and Danforth avenues. A man started shooting at innocent bystanders in the area at about 10 p.m. Along with taking the lives of Fallon and Kozis, the shooter also wounded 13 other people before killing himself.

Price said that for him and many of the other families of the victims, that night two years ago is still fresh in their memories.

“Two years later, and it still seems like yesterday,” he said. “For me, I think about it on the Sunday night because it was Sunday at 10 p.m. that we got the calls that this had happened…It never leaves you. The impact is felt keenly and we will never forget Reese and Julianna.”

Since the shooting, many of the victims’ families have joined to form the Danforth Families for Safe Communities group which calls for stricter control of handguns in Canada. The gun used by the man in the Danforth Shooting had originally been a legally owned handgun which had stolen in Saskatchewan.

Price said that more needs to be done when it comes to controlling the ownership and possession of handguns in Canada. “Not enough has been done and they are still ducking the handgun issue,” he said of the federal government which earlier this year introduced new legislation restricting possession of automatic rifles.

Price pointed out that one only needs to keep track of the news, or follow the Toronto police press releases online or on Twitter, to see that the possession of handguns and shootings are still taking place in our city regularly.

“Two years later and the same issues are still happening. There are lots of gun-related incidents happening in this city,” he said. “Nothing has changed. We still have too many guns out there, legal and illegal, and that’s the sad part.”

Though there will not be a public memorial on July 22, residents can still pay their respects to Fallon, Kozis and the other shooting victims at two memorial trees that have been planted in the north end of Withrow Park. Flowers and tribute to Fallon and Kozis were placed on their trees in the park earlier this week.

The tribute to Fallon reads: “With brave and bright wings may you and Julianna fly high and free. Reese was a funny, caring, smart, compassionate, and unique girl who was eager to contribute and make a small change in the world. Rest in love Reese.”

The tribute to Kozis reads: “Had a sparkle in her eye and a smile that brightened the night sky. She was a light; a girl who had so much love in her heart and wanted peace throughout. Words cannot explain how much we love and miss her.”