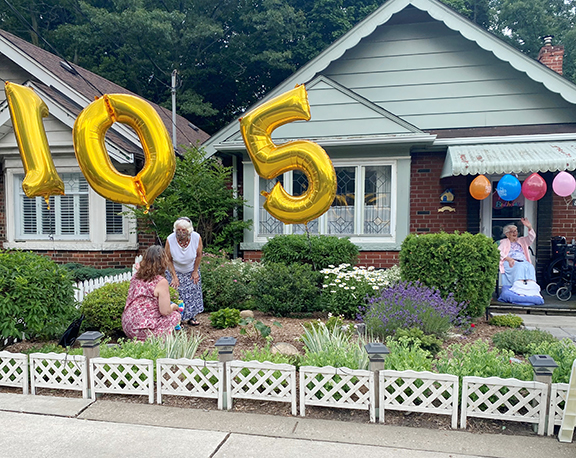 Community members came out on the afternoon of Sunday, July 12, to help local resident Bessie Stallworthy celebrate her 105th birthday in style. There was a parade of well-wishers that walked past her Kingston Road home, and also dropped off birthday greetings while she watched safely from her porch and waved. Photos by Susan Legge.

A large crowd of well-wishers paraded in front of Bessie Stallworthy’s Kingston Road home earlier this week to help her celebrate her 105th birthday.

“Bessie has been a gift to so many of us. Come by and share the love! Bessie Stallworthy has been a force for good in a challenging world for the past 105 years,” said the invitation to those coming out for the Sunday, July 12 celebration.

Due to COVID-19 safety precautions, the birthday greetings were given from a distance and cards were also dropped off in a box while Bessie waved from her front porch.

The birthday celebration brought out many community members, and numerous friends and colleagues of Bessie’s from Kingston Road United Church, along with a large media contingent.

She was born during the First World War, lived through the Spanish Flu pandemic, the Depression and survived the Blitz while living in London during the Second World War.

Bessie was married to Charles Field and had two children, Margaret and Ray. Margaret was born during the Second World War, in which Charles served as an army mechanic. Ray was born after the war.

Bessie stood with the cheering crowds outside Buckingham Palace on VE Day and saw the Royal Family emerge onto the balcony and wave to the throngs of people celebrating the end of the Second World War in May of 1945. Bessie and her family moved to Canada in 1951.

She has been a vital and vibrant member of Kingston Road United Church since she arrived, and is on the church’s Pastoral Care committee.

Charles passed away in 1969 from a heart attack. Bessie was fortunate to find love again with Phil Stallworthy and they lived happily together for 17 years until his passing.

Despite her challenges and losses, Bessie forged ahead and became even more involved in her church and community.

She also is a Lifetime Member of the Girl Guides of Canada.

Bessie is much loved by the women who found support in her single mom’s group in the 1970s.

She has spent many a Remembrance Day talking at local schools and sharing her stories of life at war, survival and unabashed belief that all is possible.

“Can any of us even begin to imaging how much the world has changed in the last century? And Bessie has been there to see it all. She remembers everything and she generously shares her stories with all who wish to listen,” said the invitation to her 105th birthday party.

Those interested in learning more about Bessie’s life can visit https://bessieat100.wordpress.com/