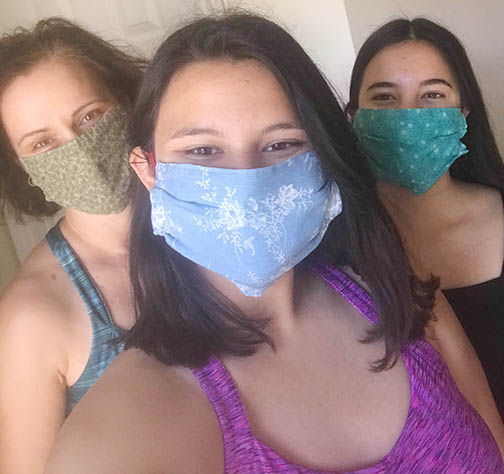 Esther, Elise and Liane show off some of the face masks made by Sheila Blinoff. Photo: Submitted.

In March when Michael Garron Hospital sent out a plea to home sewers to supply 1,000 face masks a week, I found my niche.

COVID-19 was spreading, and I would make sure that the faces of family, friends and neighbours were covered too. At that time masks were almost impossible to find as bra manufacturers and others had not yet retooled their productions lines.

I have given out more than 130 masks including some for a fundraiser for my church.

Each one took about half an hour to cut, assemble, sew, press, pleat, sew press again and then mail. Each required two 9×6 inches of fabric, preferably cotton, and 12 inches of thin elastic. As I stitched I thought about the person I was sewing for. Another benefit in the time of social distancing was talking on the phone as orders came in. Time passed quickly and I felt I was useful.

Elastic was harder to find than sanitizer or hair dye as all the sewers (or sewists as we are now called online) were searching for it. I found a cache of 88 yards of red elastic, bought it for $50 and shared with others. That would make about 268 masks.

Many of these reincarnated seamstresses hauled out machines that had lain forgotten in basements for 20 years, and they had trouble finding fresh needles to replace the blunted and broken ones for machines that could have used a good overhaul. (Not mine.)

There was a camaraderie among them and sharing of supplies. Others donated fabric, giving up sheets, tablecloths, shirts and dresses.

A neighbour phoned that her husband was dropping off a bolt of cotton lining. He also brought two sets of drapes. I was within minutes of cutting up the latter when there was a knock at the door. He had given me her brand new Scandinavian curtains.

I had a 50-year collection of fabrics. I call them my unrequited dreams – projects that I never started. Now, instead of leaving it all to my granddaughter, I’ve used some, and passed on some to others.

My son came one day to make adjustments to my two sewing machines. He felt transported back to his youth when no one went barefoot, because pins and lay all over our house. His father went to work with threads on his suit, and his mother had so many threads in her pantyhose that people thought they were veins. He reminded me that two vacuum cleaners died prematurely through sucking up crushed bobbins, empty spools, strips of fabric, pins and especially threads.

Making face coverings may not be as heroic as the flotillas of small boats that crossed the English Channel to rescue soldiers at Dunkirk. Yet it is an epic in its own way. Thousands across the country, mostly older women, answered the call to help their fellow Canadians fight a different kind of enemy.

Someone should write a book about that. Or do a thesis. Or make a film.

Don’t be surprised if it happens.