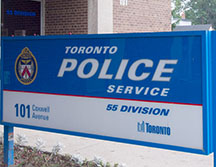 A Say No To Racist Violence; Community protest will take place in front of the 55 Division police station at Coxwell Avenue and Dundas Street East at noon on Monday, July 6.

A Say No To Racist Violence: Community Protest is planned for Monday, July 6, in front of Toronto police’s 55 Division station at Coxwell Avenue and Dundas Street East.

The protest is being organized by the United Steelworkers Toronto Area Council, the Black Action Defence Committee, the Coalition of Black Trade Unionists, and Toronto East Anti-Hate Mobilization.

It is being held to demand action from police regarding a racially motivated attack which took place in Dentonia Park late last month.

According to a press release from the United Steelworks Toronto Area Council on the evening of Frirday, July 3, two local residents were “victims of a brutal racist assault as they walked their dog in Dentonia Park.”

The release said area residents Mark Austin and Candace Zinkweg violently assaulted by a man in the park on the morning of Thursday, June 25.

Zinkweg, who is white, “was pushed to the ground and then kicked in the head by a white assailant,” said the release. “She was knocked unconscious and taken by ambulance to hospital, where she was diagnosed with a concussion.”

Austin, who is Black, was also “violently assaulted and subjected to racist abuse by the same assailant,” the release said. “The assailant made repeated death threats to Mark, including saying he would shoot Mark the next time he sees him.”

According to the release, police have not laid any charges “even though the assailant is known to them, saying it is a matter of ‘he said, she said’.”

The assailant also lives in the same building as Zinkweg and Austin, the release said.

“We recognize this is not occurring in isolation. There is a growing climate of racist brutality around the globe and systemic racism in our communities and our institutions,” said Carolyn Egan, President of the Steelworkers Toronto Area Council and one of the protest’s organizers in the press release. “We are demanding that the Toronto police immediately lay charges against the assailant.”

Mark Brown, an executive board member of the Coalition of Black Trade Unionists (CBTU), Canadian chapter, said in the release: “Police across Canada are more than willing to lock up Black lives but when the same Black life needs justice it’s an uphill battle. Until the Black life is valued as much as the non-Black life, there will be no justice and there can be no peace.”

Beach Metro News has reached out to Toronto police for comments regarding the incident in Dentonia Park on June 25, and is awaiting a response.

The community protest is slated to take place at noon on Monday, July 6, in front of the 55 Division police station.