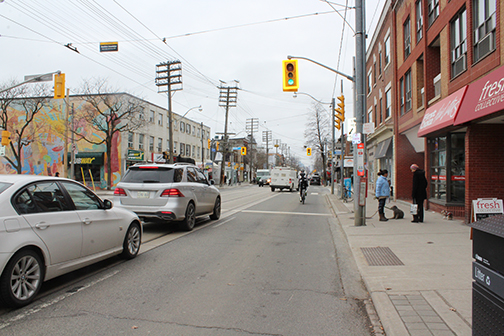 Small businesses across East Toronto, including on Queen Street East, are looking for help as they continue to deal with the impacts of the COVID-19 pandemic.

Local small business owners have some rent relief following weeks of uncertainty as Toronto councillors pushed the provincial and federal governments to act.

Commercial tenants facing difficulties with rent have some breathing room now after the province announced a moratorium on commercial evictions on June 8 – but only until Aug. 31. Meanwhile, the federal government’s Canada Emergency Commercial Rent Assistance (CECRA) has its own issues, councillors said.

The federal government announced CECRA on April 24, but the portal to apply didn’t open until a month later on May 25.

Small businesses in the community paid rent for May and June without the relief, following months of declining revenue brought by the COVID-19 pandemic.

At the same time, the province delayed announcing its moratorium on commercial evictions until June 8 – almost three months after it declared an emergency resulting from the pandemic.

Even with the late assistance, local BIAs tell councillors they think CECRA’s eligibility requirements are too high, and it requires landlords – not tenants – to apply.

“Small business owners with landlords unwilling to participate are stuck on their own,” Toronto-Danforth Councillor Paula Fletcher said.

The moratorium too only applies to businesses experiencing a 70 per cent drop in revenue. But with it in place, more landlords are likely to apply for CECRA, Bradford believes.

“If eviction is no longer an option, you’re more inclined to participate,” he said. “Although it took a long time, it’ll be helpful now that we have it in place.”

It was on March 27 that Bradford, Fletcher, and several other councillors across the city began communicating the province and federal government of the growing need of rental assistance for local businesses. Bradford sent a letter to Premier Doug

Ford asking to stop eviction orders for April rent at that time.

On April 7, following consultations between the mayor and the city’s economic task force, property taxes and fees were deferred in Toronto – with yet no announcement from the province about commercial rent.

The federal government announced CECRA on April 27 and, after speaking with local BIAs and businesses, councillors responded by asking for more flexible parameters to qualify, and questioned the landlord-driven application process.

On April 29, about a month after the emergency was announced, Bradford again sent another letter to Ford asking for support in stopping small business evictions.

“Rent continues to be the most critical challenge for small business,” Bradford wrote in the letter.

CECRA finally launched May 25 and by June 3 there were only 16,000 applications as the province had yet to announce a moratorium on commercial rent. On June 8, it finally made the announcement.

While the delay may have frustrated business owners, many are glad the relief has arrived.

While restaurants managed to stay open for takeout and delivery as essential services, those not deemed essential – like Cresswell Dance Academy on Queen Street East – were forced to close due to COVID-19 protocols.

The dance studio has held classes online with significant losses to revenue in the last three months.

“With revenues compromised, we are grateful that our landlord has been kind and supportive by not only allowing us a delay in rent payments, but also applying for CECRA,” co-owner Tom Melissis said.

“As we wait to hear if our July and August summer dance day camps – a significant source of revenue – can proceed with strict adherance to COVID-19 health and safety precautions, we definitely will be struggling if CECRA is not extended,” he added.

The federal government announced June 16 it was extending the Canada Emergency Response Benefit to the end of summer.
Bradford hopes a similar announcement will follow for CECRA.

“CECRA runs till end of June,” Bradford said. “Toronto is not even in Stage 2 yet, we need to look at expanding and extending it.”