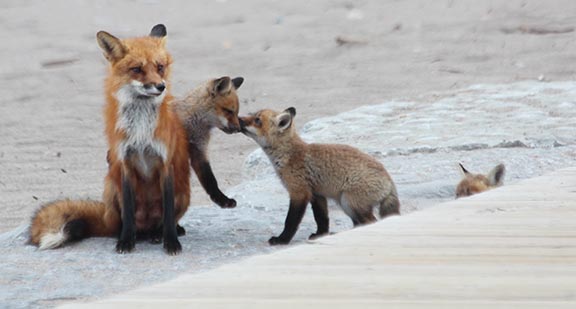 This photo from earlier this spring shows the kits and vixen of the family of foxes living under the Boardwalk. Photo by Ana Luisa Santo.

For a number of reasons, including two cases of threats of physical violence, the volunteers from the Toronto Wildlife Centre will no longer be monitoring the fox family living under the Boardwalk in the Beach.

In a statement posted on the Toronto Wildlife Centre Facebook page, it was announced that June 8 would be the last day volunteers would be there working to protect the foxes.

While part of the reason for the volunteers leaving is that the fox kits are growing older, there have also been threats made against the volunteers and it is felt it is unsafe to have them there anymore.

In one of the incidents, a man holding a knife went towards one of the teenage volunteers monitoring the foxes. In a second incident, a man told a volunteer that “if he had a knife he would stab her.”

The fox family have been living in a den under the Boardwalk since the middle of April. Human interactions with the foxes were putting them in danger and barricades were installed to protect the den and keep people away. The first barricade was put up in late April and a second bigger one, monitored by Toronto Wildlife Centre volunteers, was built in early May.

In late May it was reported that one of the fox kits had been killed right outside of the den’s entrance by what was believed to have been an aggressive off-leash dog, according to the Toronto Wildlife Centre.

Now that its volunteers will no longer be there to monitor the foxes, the Toronto Wildlife Centre is appealing to members of the public to not feed the foxes under any circumstances and to keep dogs leashed and away from the den.

The full statement from the Toronto Wildlife Centre’s June 8 Facebook announcement is as follows:

“The young foxes at Woodbine Beach are reaching a more independent age, and they’re venturing farther from the den, sometimes on their own.

“The aversive conditioning our dedicated volunteers have been practicing has had an effect on the kits and helped encourage them to avoid people more than they were before we arrived on scene. They’re practicing hunting on their own, as well as on animals their parents bring them.

“The fox kits are older and soon they will be moving on – and it’s time for TWC’s volunteers to move on too.

“Today is the last day volunteers will be stationed at Woodbine Beach.

“Over the past month, 58 volunteers have contributed close to 1500 hours of time doing their best to protect the fox family.

“A huge thank you to all those wonderful, dedicated volunteers! There has been heartwarming support from members of the local community, dozens who have joined ranks with TWC’s volunteers to educate the public about urban wildlife and the importance of leaving the foxes alone.

“Unfortunately, there has also been hostility towards our volunteers at times, including verbal abuse. There have been two VERY serious threats of physical violence – one where a man told a volunteer “if he had a knife he would stab her” and, more recently, a man who actually went after a teenage volunteer with a knife.

“Understandably, the city doesn’t have the resources to provide police officers on scene 16+ hours per day, 7 days per week, to protect our committed volunteers. But as an organization, despite our deep concern for the fox family, the safety and well-being of our volunteers is paramount. As a result of these serious concerns, we have made the difficult decision to conclude the presence of our volunteers on site.

“We’re now turning to compassionate members of the community and anyone else who visits the Woodbine Beach area to provide the best environment for the beloved fox family. Keep dogs leashed and far away from the wild animals, since dogs and their close cousins coyotes are predators to foxes – habituation to a major predator could lead to another fox’s death. Please do not approach them, and it is critically important to never feed them. Feeding of wild animals changes their behaviour and causes them to become tame, which can be fatal. Lead by example and encourage your neighbours and fellow dog-walkers to do the same – and please spread the word!

“We will continue to do what we can to help the fox family, such as working with the city on signage and continuing to try and educate the public. But it’s up to everyone now to ensure their long-term survival.”