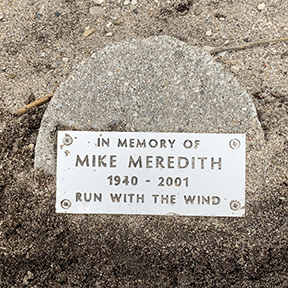 The plaque for Mike Meredith, who loved to run. Inset photos show some of the plaques mentioned by Erwin Buck in his story looking at the lives of those honoured by these Beach memorials. Photos by Erwin Buck.

In my first article in January about the memorial plaques along the Beach waterfront I mentioned Dorothy Adams, whose plaque was the impetus for this project.

A reader, Ali Matthews, who was in the late stages of pregnancy, was considering Dorothy as a name for her soon to-be-born daughter, but she was on the fence about it. One day, while out for a walk with her young children, they stopped at Dorothy’s plaque. The children asked her to read the plaque and when she read the dedication — “Dorothy Has Left The Party” — she laughed and knew that Dorothy was the perfect name.

I also mentioned Frank “Ike” Commins who was on two Grey Cup teams for the Balmy Beach Club.

He married Molly (Olga) Porter. The Porter family was deeply involved with the club, and Molly’s father, William Porter, was one of the club’s founders, and Molly’s brother, Bobby Porter, was inducted into the Canadian Football Hall of Fame. Olga Commins’ tree memorial is just west of the club.

Pauline and Alf Best, whose bench is at the east end of the Boardwalk, were also mentioned in the first article. Nearby is one dedicated to Alan Watts. His daughter, Shiona, wrote to say her mother had died at a young age, and Pauline and Alf used to have the Watts children over for dinner at least once a week.

Alan Watts’ plaque dedication reads: “His life was a statement of love and compassion”.

Just a bit further west is a tree plaque for Mike Meredith. The inscription reads: “Run with the Wind”. And run with the wind he did. After Mike died in 2010 at age 60, Beach Metro News ran a full-page article about his life and his accomplishments.

“Running was a thread that wound its way through Mike’s life. He ran to work and back, he regularly ran the boardwalk, and he ran 18 consecutive Boston Marathons.”

A bench near the Ella Kaye Residences is dedicated to Bonnie Bennett with the inscription: “May your spirit run free.”

A life-time Beacher, Bonnie was a familiar running figure on the Boardwalk with her long blond hair blowing in the wind. She embodied the term ‘free spirit’.

The Beach has long been a haven for artists of all kinds: painters, actors, photographers and craftspeople.

Steve Weston was a familiar face on stage and Canadian television in the 1970s and 1980s. He was well known for his role as the husband in the sitcom The Trouble with Tracy as well as his Participaction commercials. He died in 1985 from a fall at age 45. His tree memorial is just east of Hammersmith.

Along the eastern part of the Boardwalk, between Balmy and Beech, you’ll find a bench dedicated to Claire Crawford Guinn. She was an integral part of Toronto’s Bloomsday for many years. When Claire’s bench was installed there was a ceremony which involved, among other rituals, a blessing of the bench with Bell’s Whisky, her favourite.

Adjacent to Silver Birch Avenue is a tree dedicated to Betty McGuire. She was a co-founder of the Main Attraction Theatre Company. According to friends, Betty was the world’s greatest Jane Austen fan.

Roussi Tarmakov was an accomplished musician and composer who had many honours bestowed on him in his native Bulgaria.

Roussi emigrated to Canada with his family to seek a better life. He taught piano and at the annual student recitals he would perform one of his compositions. Many of his students would credit Roussi for providing their strong musical foundation. His tree plaque is in Ashbridges Bay Park. All artists in the community owe a debt of gratitude to Gaye Hachie, who along with her sister, Maureen Warland, founded the annual Beaches Arts and Crafts Show in 1984.

The show, which is held annually in Kew Park, is still a much-anticipated community event. Gaye retired from the show in 2010 for health reasons. She died in 2011 at age 62. Her tree plaque reads: “35 Years of Community Service.”

Tragedies remind us that life is fleeting, and we cannot take it for granted.

Sisters Alexandria and Mikaela Hayes, aged 10 and 11, died in a car crash in 2011. Although they lived in Beaverton, they spent a lot of time with their grandmother on Fernwood Park. When they came to visit her, they became a part of the neighbourhood, enjoying all the attractions that the Beach offers. Their memorial plaque besides the Balmy Beach Club reads “In Gratitude For all the moments of their lives”.

Doreen Grant has a memorial tree near the west end of the Boardwalk. Beside her tree is another one, dedicated to her grandson, Scott.

Some years after Doreen passed away, the family gathered at Deerhurst to scatter her ashes in Algonquin Park. Scott made the trip by motorcycle and, due to bad weather, he crashed and died. He was 45. His plaque reads: “You left us too early.”

Piero Zambotti was an assistant editor of Cycle Canada Magazine.

On a road test trip with two others from the magazine, Zambotti’s motorcycle went wide on a corner and hit the guardrail. He did not survive the accident. He was 26 years old. His bench plaque at the bottom of Hammersmith reads: “Brave, Bright, Beautiful.”

A tree plaque west of the tennis courts is dedicated to the memory of Sylvie Wilson. It reads: “For all too brief time, an Angel walked among us.”

A bit further west is a bench dedicated to Lola Mackenzie Bower who died 16 days after being born. “Lola’s heart was too big for this tiny world.”

In the same area is a tree plaque dedicated to Oliver Muirhead. The plaque refers to him as “Odd Socks Ollie”. One can only imagine how he got the nickname.

Inscriptions on many benches encourage passersby to stop and linger.

A bench for Nan Penny bears the inscription, “What a perfect spot, let’s sit for a bit.” On a rise, in Ashbridges Bay Park, is “Aunt Heather’s Bench”. It has a beautiful vista of the bay and the skyline, and the invitation on the plaque is: “Bench Warmers Welcome.”

A bench for Eva and Alf Talbot invites us to “Bide A Wee,” while a bench dedicated to Harry Hoskins bears the inscription, “Come sit with me awhile.”

A reader wrote and said that she loves sitting on David Cooke’s bench because of the advice on the plaque: “Enjoy Life With a Passion. Be Happy, Laugh & Have FUN!!” Immigrants are woven into the fabric of Canada. Most emigrated to find a better life for their families.

For example, Vincenzo and Palmira Tino emigrated from Italy in 1959 with two children. Palmira was pregnant at the time and Vincenzo had to bribe the ship’s captain to allow her to make the voyage. Ultimately, they had five children, four boys and a girl. Vincenzo was a cement finisher and Palmira was a homemaker. The family lived in the west end, but the boys all moved to the Beach when they were adults and raised their families here. Palmira has a grandson, Palmer, named after her. The Tino tree plaque is east of Hammersmith Avenue. Marie and Pete Hoogeveen arrived in 1951 with their four children. Two more were born in Canada. Pete worked at the CNIB’s Fragrant Garden. In the neighbourhood, he was well known as he cycled or scooted to his favourite places. One of their two plaques near the swimming pool reads: “From Netherlanders to Devoted Beachers”.

Every community has its share of unsung heroes. Never sharing the limelight they are nonetheless the backbone of the community.

Kirk Ryan is a case in point. A lifelong Beacher, he was a lifeguard, manned the Silver Birch boathouse, coached T-ball and soccer, and was a leader with Scouts Canada. Kirk’s bench is on the beach, at the foot of Munro Park, overlooking the lake. His plaque reads: “A million memories weave him into this place and the hearts of all who knew him.”

Dale Reiart is memorialized by two tree plaques. She was a long time Kindergarten teacher at Kew Beach Junior Public School. After her retirement, she supply taught at the school and for a brief period my grandson was in her class. Reiart was a pillar of the community who impacted many young lives in a meaningful way. She was also very active with the Toronto Beaches Lacrosse, serving as their president for some time.

In Kew Park, a Freeman Maple Tree is dedicated to Heather Duncan. Hez, as she was known to friends, was a committed volunteer in her spare time including a stint as president of the Balmy Beach Lawn Bowling Club.

She was an artist and a photographer. A friend was quoted as saying “Hez made you laugh until your ribs hurt.” Hez died in 2018 at the age of 59. A bench near the Gardener’s Cottage, also dedicated to her, bears the inscription: “Heaven has one more smiling face.”

Every plaque has a story. If you have any stories to share, please email me at erwinbuck@hotmail.com

In closing, words of wisdom, as found on the plaques: “The most important thing is love” (Jan Sweet), and “Love, Laugh, Live & Give” (Grace Barnett).