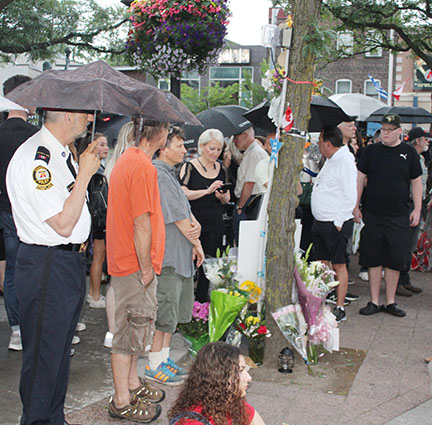 Community members take part in a vigil to remember the victims of the Danforth Shooting during an event held on the one-year anniversary of the shooting. The shooting, which took the lives of Reese Fallon, 18, and Julianna Kozis, 10, and wounded 13 others, took place on July 22, 2018.

A group formed in the wake of the deadly Danforth Shooting in July of 2018 is calling on the federal government to institute a nation-wide ban on the private ownership of handguns.

In a press release issued on May 29, Danforth Families for Safe Communities (DFSC) said the federal government’s recent ban on the private ownership of assault-style weapons did not go far enough as it should have included handguns.

“We have an ongoing handgun problem in Canada and now is the time for leadership and action from our federal government,” said Patrick McLeod, a retired Toronto police officer and DFSC member.

“Nothing has changed regarding handguns, and nothing will change unless the government acts. This type of gun, concealed and powerful, in the wrong hands, takes too many lives, and creates terror and tragedy too frequently.”

DFSC is a group of survivors, families, friends and community members who were impacted by the mass shooting tragedy on Danforth Avenue on July 22, 2018.

Thirteen other people were wounded in the shooting which took place near Logan Avenue on a busy summer night.

“The DFSC have come together in the wake of our tragedy to share our views and experience, in the hope that others will not have to experience anything similar,” said the May 29 press release.

Also, the Montreal-based gun control advocacy group PolySeSouvient, asked whether Canadians felt the decision to ban handguns should be federally determined or left to municipalities. An Environics Research poll conducted from May 11 to 14 showed 69 per cent of Canadians would prefer gun control laws banning or further restricting handguns to be national and applied uniformly across the country, as opposed to having the federal government work with municipal governments to allow for local bans or further restrictions on handguns.

Making the decision to ban private ownership of handguns, rather than leaving that decision to individual municipalities, was a key finding of the PolySeSouvient poll released on May 29.

“These recent surveys of average Canadians simply restate what survivor groups, doctors, many mayors, and even responsible gun owners have indicated”, said McLeod. “They want handguns prohibited, and they want that at a federal level”.

The victims of the Danforth Shooting, their family members, friends and first responders on the night of July 22 have all been impacted by the “grief created by one lone gunman, his hate, and his loaded handgun,” said the DFSC press release.

“We won’t accept living in the shadow of a handgun. Nor will we accept that any of us who continue to struggle with the impact of this tragic event should do so quietly or in isolation,” said Tilly Gray, DFSC member and co-organizer of the Danforth Community Sale.

Gun violence continues to be a problem in Toronto. In 2019, the city had a record 490 shooting incidents, and the numbers are trending even worse for 2020.

As of May 25, the Toronto Police Service website shows there have been 18 per cent more shootings and 21 per cent more fatalities this year compared to 2019, on a year to date basis, the DFSC release said.

Though the federal government has been taking steps to address issues surrounding gun violence, the decision to leave handgun bans to municipalities should be reconsidered, said the DFSC release.

It could create a “patchwork of laws that will sow confusion among gun owners, those concerned about guns, and those who will enforce these laws,” said the release.

“We must start asking why handguns, among other firearms, are part of the mix in Canada given the threat they pose to others, even with careful ownership,” said Ken Price, whose daughter was wounded in Danforth Shooting.

“A vocal minority of gun owners will complain about any handgun ban; however, given what happened to us, we have an issue with close to one million handguns in Canadian homes, and in 2,400 retail stores, that can be stolen, diverted to criminals, sold to fraudsters, and used to kill at a distance with the pull of a trigger.”

The DFSC is joining other groups in calling on the federal government to follow through on its plan to prohibit assault style rifles, commit to stop illegal guns from coming in at the United States border, revamp laws to further deter those that divert guns to crime, and prohibit handguns.

In an interview with Beach Metro News earlier this month, Beaches-East York MP Nathaniel Erskine-Smith said he is favour of a ban on the private ownership of handguns.

“During the election campaign (in fall of 2019) I said this did not go far enough and I said we should have no private ownership of handguns. You should only be allowed to use and store handguns at a range,” he said.

“I see no reason for civilians to have private possession of weapons specifically designed to kill people.”

Erskine-Smith, a member of the ruling federal Liberals, said the ban on assault weapon ownership is an important first step in what will be a long process towards stricter gun control measures in Canada.

He added that the federal government is also taking actions to stop illegal importing of handguns, but added that a number of handguns used in crimes in Canada were once considered legal before they ended up in the hands of criminals.

That was the case with handgun used in the Danforth Shooting. That weapon, a .40 calibre handgun, was originally owned legally and stolen a number of years ago in Saskatchewan.

The DFSC said it realizes more than weapons control measures are needed to stop gun violence, but that should not prevent a ban on the private ownership of handguns being implemented across the country.

“As a group of families and community members, we experienced a failure of existing policies just once, and once should have been enough for everybody to want to take every action possible to prevent this from happening again”, said Price.

In calling for this national ban on the private ownership of handguns, the DFSC is joined by the Coalition for Gun Control, PolySeSouvient, Student movement NOT_HERE, and Canadian Doctors for Protection from Guns.