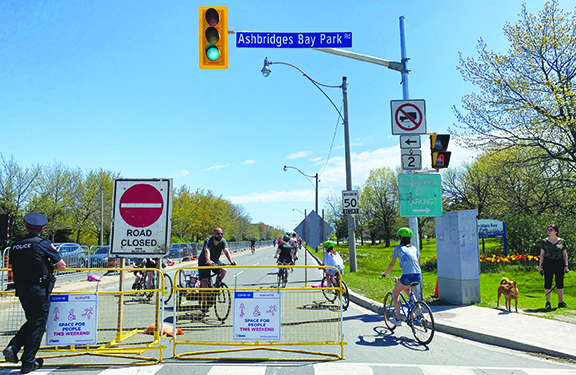 Many residents came out to enjoy some extra space on Saturday, May 23, as the eastbound lanes of Lake Shore Boulevard East were closed between Coxwell and Kew Beach avenues. Photo by Susan Legge.

East Toronto residents took advantage of the warm weather and ActiveTO this past weekend as visitors flocked to Ashbridges Bay and Woodbine Beach parks after the city announced a reopening of some parks and amenities.

“By and large folks are understanding and respecting the need for physical distancing, getting out there, and being responsible,” Beaches-East York Councillor Brad Bradford said, who was at the parks over the May 23/24 weekend with Mayor John Tory.

“ActiveTO provided additional space. The multi-use trails and Boardwalk can get crowded, so this provided that much needed space.”

ActiveTO is a city initiative to ensure residents have ample space to allow for physical distancing. It includes Quiet Streets, closing major roads for active transportation such as cycling or walking, and expanding the cycling network.

Over the past weekend, parts of Lake Shore Boulevard East in the Beach was closed to traffic as well as parking lots in the area as part of the initiative.

Reopening the Woodbine Beach and Ashbridges Bay parking lots, which have been closed by the City of Toronto since the end of March, is “being evaluated,” Bradford said.

He added the city is encouraging residents to use active transportation while the ActiveTO initiative is on.

Like many who spoke out over the weekend, Bradford was not pleased with the crush of visitors at Trinity-Bellwoods Park in Toronto’s west end.

“It was disappointing, everybody said that,” he said. “That’s not what we want to be doing. We’re not out of this yet, there’s a risk and it’s on all of us to take the necessary steps and precautions.”

However, among the city’s 1,700 parks, most residents followed precautions, Bradford said.

“While healthy residents are encouraged to get fresh air and exercise, provincial Emergency Management and Civil Protection Act orders and the City bylaw on physical distancing remain in effect,” the press release said. “Requiring people who are not from the same household to maintain a physical distance of two metres in a park or public square.”

The city has placed additional bylaw officers in its parks to make sure people are following physical distancing guidelines.