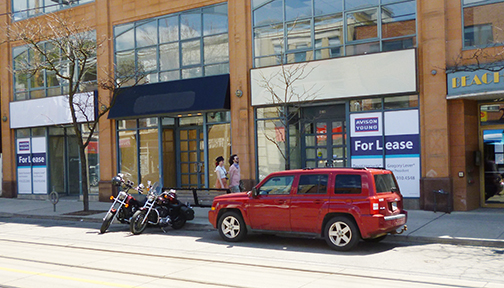 Stores on Queen Street East in the Beach have for lease signs in the windows. Photo by Tom Trei.

Sunday, May 3, was a sunny, warm spring day with sparse groups and individuals going for walks on the Boardwalk and Queen Street East. The crowds were far less than what one usually encounters on  a typical warm spring or summer weekend, with most people trying to maintain some social distancing, though six feet at times was impossible to keep on Queen Street.

Two things stood out on this atypical day in the Beach. First there were fewer children and dogs than normal out and about, and second, Queen Street East from Woodbine Avenue to the Neville Park Queen streetcar loop presented a bleak commercial landscape, save for the lineup for the LCBO.

In that stretch of Queen, there were 48 street-front spaces available for occupancy, 34 on the sunny north side, with 14 spaces on the south side, which also has park, school and low rise residential street fronts.

Additionally, many dozens of restaurants and bars, that were forced to close as non-essential businesses, had signs posted from mid March stating that they anticipated reopening anywhere from the end of March to mid April, which has now passed.

Anticipating how many of these temporarily shuttered businesses will actually reopen at all, would be a guess, if they have to abide by the current six-foot social distancing rule.

Without this year’s additional COVID-19 pressure, these primarily seasonal restaurants and bars already have a difficult time making ends meet in their slower seasons.

What is becoming clear is, there undoubtedly will be far less of the relaxed, friendly Beach spirit this year on Queen Street East.

Only businesses that have less seasonality or risk will be able to handle the very high Queen Street rents, and some such businesses have already made inroads.

There are now several real estate and  lawyers offices, and some personal services providers that can better handle the seasonality of Queen Street’s sidewalk traffic. Those by themselves will not add much to the neighbourhood’s character, unless there were ‘watering holes’ for their clients to visit as well.

The large corporate outlets such as the LCBO, Shoppers Drug Mart, Tim Horton’s and Starbucks may be able to handle the rent, however, they only help raise rates for the others who are considering opening businesses on Queen Street East.

Beach businesses have wrestled with this problem for decades. Unfortunately this year’s piercing economic situation is forcing another re-examination.

There is no silver bullet solution. However, a little bit of many things such as shorter or seasonal leases, lower rents, official tourist designation, BIA ingenuity and local residents making more of an effort, all will help!

Let’s all support the bold local entrepreneurs who will take a chance and make an effort in these tough times!