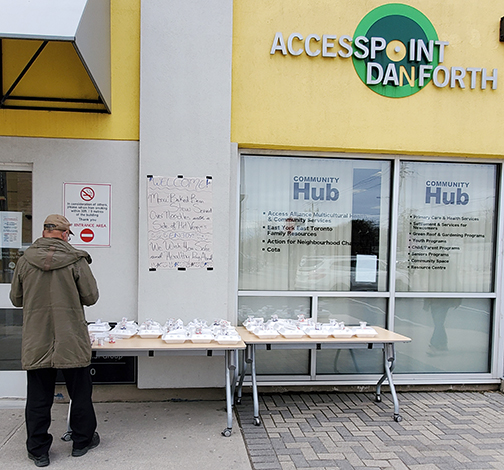 During the COVID-19 pandemic, AccessPoint on the Danforth is providing the community with hot meals they can pick up outside on Tuesday and Friday afternoons. Photo: Submitted.

At Access Point on the Danforth, 3079 Danforth Ave., hot meals are being served but just not in the traditional setting most people are used to.

Access Alliance Multicultural Health and Community Services is providing hot meals for the community on Tuesday and Friday afternoons during the COVID-19 pandemic.

They are calling the program Community Dash n’ Dine.

Access Alliance is a community service organization which helps improve the lives of people facing barriers to health. Its AccessPoint outlets, on Danforth Avenue just east of Victoria Park Avenue and on Jane Street, are still providing services for the community but at a distance or virtually.

“We have been continuing our effort and most of our programs, either we are continuing in a modified form or we are offering programs virtually,” said Rejwan Karim, program and hot meal manager at AccessPoint on the Danforth which is located just east of Victoria Park Avenue.

Karim said before the outbreak of COVID -19, they hosted a dinning program that would run on Fridays feeding anywhere from 60 to 70 people. He said after being forced to close their doors to help stop the spread of the disease, many people started inquiring about the organization providing meals.

“People were asking whether we are opening our Friday dinning program for them,” Karim said.

He said after receiving many calls and emails about the meal program, food, and other inquires, it prompted the organization to continue its efforts to help feed the community.

Karim said that on Tuesdays and Fridays, meals are prepared at the Danforth and Victoria Park location between 10 a.m. and 1 p.m. They are then placed on a table outside of the building where the community can feel free to help themselves to boxed meals.

Karim said he does allow some people to take multiple meals because many people have loved ones who can’t leave their homes.

“When we started our first modified program in March, we started with 30 boxes and within the last week we do 120 boxes per day,” Karim said.

During the first two weeks, he said, many people came by and all the food boxes would be gone within a few minutes. He said over the following weeks, they started increase the amount of food and now they’re up to serving 120 meals.

Karim said AccessPoint are taking safety precautions especially in their kitchen where the food is being prepared. He said this is why they started curbside pick-up and eventually he would like to be able to deliver food to people’s homes.

Fortunately for Access Alliance, they are being sponsored by three different organizations which Karim said they hope to expand in the near future. The Daily Bread Food Bank and Community Food Centres Canada support the Danforth location, while Second Harvest takes care of the Jane Street location which provides curbside meal pick-up Mondays and Thursdays.

Karim said these sponsors will last for another eight to 10 weeks and it’s not clear when the pandemic will be over so it’s important that programs like these continue to receive funding.

People are “very, very thankful” for the meals, Karim said.

Meal distribution times on Tuesdays and Fridays at AccessPoint on the Danforth are between 1 and 2 p.m.