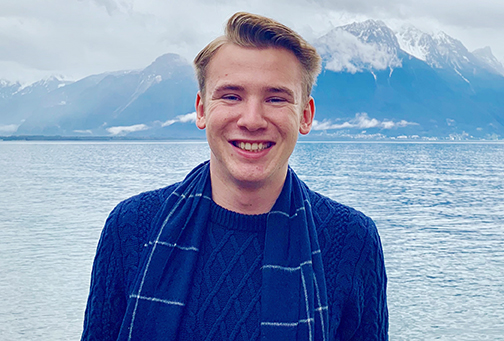 Local resident MacKenzie Sharp will be shaving his head on Saturday, May 9, to help raise funds for Food Banks Canada.

Beach resident MacKenzie Sharp will shaving his head on Saturday, May 9, in order to help raise funds for Food Banks Canada and the work it is doing to support those in need during the COVID-19 pandemic.

The event will take place on the front porch of Sharp’s home on Lyall Avenue, in the Main Street and Kingston Road area at noon. Neighbours are anticpated to watch from the street while keeping a safe social distance, and the event will also be live-streamed on Facebook

Sharp, 21, is has lived in the Beach area his entire life. His family first lived on Hambly Avenue and then moved to Lyall Avenue about 10 years ago.

He said he was inspired to help Food Banks Canada after watching the Stronger Together/Tous Ensemble concert on April 26.

“I decided to raise money for Food Banks Canada not only because I think that they are a fantastic organization, but also because they are able to best allocate the money wherever it is needed most,” said Sharp. “Being a national charity, they are able to help Canadians from coast to coast when they are in dire need.”

Sharp has set up a GoFundMe page to collect donations for Saturday’s event.

By supporting a national organization such as Food Banks Canada, Sharp said he has been able to get donations from across the country.

“It has proven easier to raise money from friends and family for a charity that helps Canadians everywhere. We have had donors so far from Calgary, Kelowna, Halifax and St John’s. Even international friends have donated from Taiwan and the United States,” he said.

A student at Orange Coast College in Costa Mesa, California until having to return home in early March, Sharp went to school locally at Williamson Road, Glen Ames and Malvern Collegiate.

He’s hoping the head-shaving event will not only help raise some money for a good cause, but also bring people together and even offer up a bit of humour.

“I think it’s important to do something like this during the pandemic crisis because not only does it help people in need, but it brings people together (if even from home),” said Sharp.  “I know that my friends and family will get a good laugh out of watching it, and will feel like donating was worth it. It’s great that me doing something so small like shaving my head can encourage people who otherwise wouldn’t to donate to charity.”

Sharp said this is the first time he has organized a fundraiser, but said the crisis caused by COVID-19 makes this a time to step up and help others.

“Part of my motivation for doing this is the economic crisis that Canada is currently facing due to the pandemic. Food Banks Canada is likely having to feed a lot more people than usual, as many people are facing tough times financially,” he said.

“A lot of people who never thought they would be in such a dire situation have been put in one due to something that’s completely out of their control, and they need our help.”

Those wishing to help Sharp in his fundraising for Food Banks Canada are encouraged to visit his GoFundMe page at: