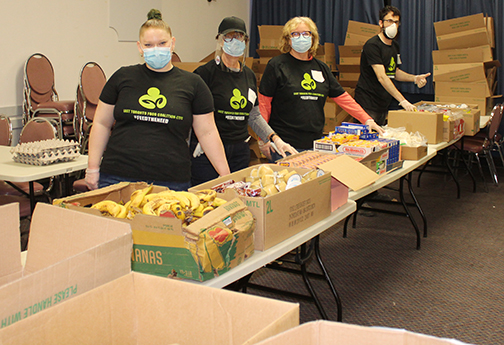 The East Toronto Food Coalition (ETFC) has expanded its operations to serve families in need during the COVID-19 pandemic.

Organizer Ally Lariviere said that as of last week (May 1), the coalition had helped out 320 families with deliveries of food items, baby care and hygiene products, and numerous ready-made meals.

The ETFC is now using space at the Royal Canadian Legion Branch 11 on Dawes Road to store, sort and organize deliveries of donated items to those who need them.

Legion branches across the country have been making space available to community organizations, food banks and others who are helping out during the COVID-19 crisis.

“It’s lot more user-friendly than my apartment,” said Lariviere of the space made available to them at Legion Branch 11 two weeks ago. “It’s way more accommodating for volunteers, storage and sorting.”

She said that Beaches-East York MP Nathaniel Erskine-Smith helped connect her with Branch 11 officials to set up the use of the space for the ETFC.

Last Thursday, April 30, there were about a dozen volunteers helping sort boxes of food donations and prepared meals for delivery to individual families in need and to food banks in East Toronto.

“We’re getting donations from local groups and the general public,” she said, including Upper Crust Canada bakery.

The prepared meals are being donated by Maple Leaf Sports and Entertainment and being made at the kitchens in Scotiabank Arena.

Lariviere said the Legion’s facilities offer a large walk-in fridge and a freezer which have been extremely helpful in storing food donations.

Families looking for help from the ETFC can contact Lariviere at covidfoodcoalition@gmail.com

She said deliveries are usually turned around within 48 hours once a request is made.

Food items are not being distributed directly to people from the Legion, but are being delivered to the residences of those in need by volunteers.

The public is reminded that they cannot come to the Legion to pick up a food hamper. Those wishing to make donations can drop them at the Legion but only between the hours of 11 a.m. to 1 p.m. from Monday to Friday. It is best to contact Lariviere by email prior to dropping off a donation. For information on making monetary donations to the ETFC, please email covidfoodcoalition@gmail.com