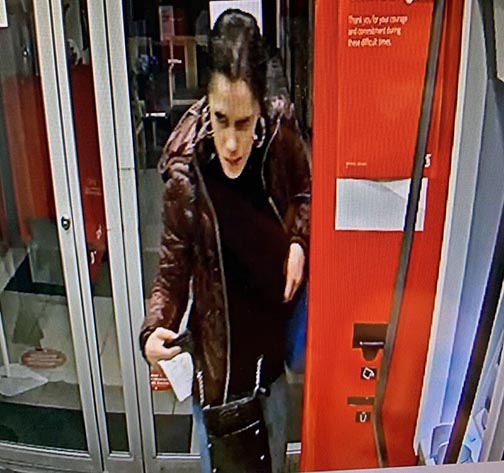 Toronto police are seeking information on this woman in connection with a mischief investigation at a bank in East York.

Toronto police are asking for the public’s help identifying a woman who was seen on a security camera allegedly spitting, coughing and wiping her saliva on an ATM and surrounding area at a bank in the Pape and Cosburn avenues area of East York.

The incident was reported to police on the morning of April 30.

Police allege a woman entered the lobby of a bank at 1002 Pape Ave. at 5:33 a.m. on April 30 and once inside she began spitting, coughing and wiping her saliva on the ATM and surrounding area for approximately five minutes.

She is described as having dark hair in a bun, wearing silver hoop earrings, a brown coat with a black shirt, blue jeans, black shoes and she was carrying a blue bag.

Security camera images have been released by police of the woman they are seeking.

Anyone with information on the woman being sought in connection with this investigation is asked to contact police at 416-808-5500, Crime Stoppers anonymously at 416-222-8477, online at https://www.222tips.com