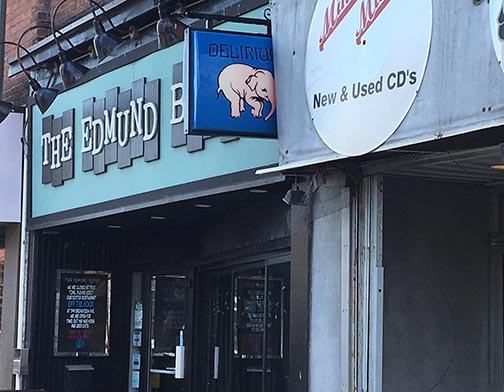 The owner of The Edmund Burke pub on Danforth Avenue said rent relief will be critical to the survival of small businesses during the COVID-19 crisis.

More than half of Toronto’s small businesses fear they may have to close permanently within the next three months unless they get more relief from the provincial and federal governments, said Toronto-Danforth Councillor Paula Fletcher.

She made the comments in the wake of the release of a survey developed by the Broadview-Danforth BIA which was made public on Wednesday, April 22.

“Before this survey we could only speculate on the impact of the pandemic on our Main Streets. Now we know that without rent relief many businesses simply will not be able to re-open. The clock is ticking for the future of small business in this city,” Fletcher said in a press release announcing the survey’s results.

According to the survey, 61 per cent of the businesses taking part said they would have to close down permanently within the next three months if there are not any additional relief programs made available to them.

Most important are programs that help them cover their rent or protect them from commercial evictions while their businesses are ordered closed due to COVID-19 restrictions.

The survey said that if the current amount of support is not increased, the number of businesses having to close for good after five months could be 75 per cent.

The survey pointed out that a rent relief program is what would be most needed. Such a program was supported by 84 per cent of the business tenants and 75 per cent of the landlords.

The survey also revealed that for last month, 74 per cent of landlords said they did not receive rent from their commercial tenants.

Ginger Robertson, who owns The Edmund Burke pub on Danforth Avenue and the Off The Hook fish house on Broadview Avenue, agreed that rent relief is the top priority.

“What we really need is rent relief. Both businesses and landlords agree that loans and wage subsidies are not enough,” he said in the April 22 press release. “We need to be able to pay rent and that’s becoming extremely difficult.”

The owner of The nearby Auld Spot Pub on Danforth Avenue, Nathan Hynes, agreed rent relief was critical. He also worried about the future of the area once pandemic restrictions end.

“Without any rent relief assistance, many of us will have to shut down,” Hynes said in the April 22 release.

“Our main streets won’t look the same when we come out of this. The survey clearly shows what’s not working and what’s most needed.”

The survey also revealed that long-time businesses are equally as vulnerable as those that are relatively new.

Last week, both Fletcher and Toronto-Danforth MPP Peter Tabuns called on the provincial government to put a stop to commercial evictions, as has been done for residential evictions, during the COVID-19 crisis.