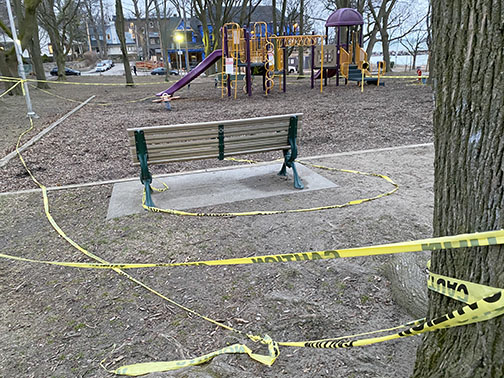 The Balmy Beach Park playground is among amenities closed in City of Toronto parks due to the COVID-19 pandemic. Photo by Susan Legge.

A frustrated Mayor John Tory said he has called on Toronto police for an enforcement blitz on people accessing closed city parks, school and other amenities during the COVID-19 crisis.

Tory made the comments in an interview on CP24 on the morning of Thursday, April 2.

“I really hope in this case that police officers and others will give people a warning and quietly move them along but that they will also write significant numbers of tickets,” Tory said in the interview with CP24.

He specifically pointed to an incident on Wednesday where a number of people who had climbed the fence of a closed high school facility so they could jog on its track were filmed by media.

“All those people at North Toronto Collegiate Institute that climbed over the fence just to jog, they should be given a ticket, a $750 minimum ticket. I am at the point now where I just can’t let this kind of behaviour continue when I have been told very clearly by professional health experts that these kind of things taken as a whole are putting lives at stake,” said Tory in the CP24 interview.

On the evening of April 1, Toronto police sent out a release clarifying for residents the social-distancing enforcement measures that officers will be following during the COVID-19 crisis.

As of yesterday, police had reportedly issued 14 tickets for non-compliance with either the closing of park amenities or gatherings of more than five people.

In the release, police reminded people that travelling, or being parked in a car, with five people or less – including individuals from different home addresses – is not against the law.

Residents are also reminded that government directives apply to “organized public events and social gatherings” of more than five people, as well as the ordered closures of the following locations:

– All facilities providing indoor recreational programs
– All public libraries
– All private schools as defined in the Education Act
– All licensed child care centres
– All bars and restaurants, except to the extent that such facilities provide takeout food and delivery
– All theatres including those offering live performances of music, dance, and other art forms, as well as cinemas that show movies
– Concert venues
– All City-owned playgrounds, sports fields, basketball and tennis courts, off-leash dog parks, skateboard and BMX parks, disc golf courses, picnic areas, outdoor exercise equipment and other parks amenities, as well as parking lots attached to its parks system

Police said in the release that questions about organized public events and social gatherings of more than five people or open businesses that should be closed, can be addressed by calling 311.

City of Toronto bylaw officers will be monitoring and providing information and education to non-compliant individuals and businesses.

The release said that in some cases,  police are contacted to conduct enforcement actions under the Province of Ontario’s Emergency Management and Civil Protection Act.

Police will continue to conduct proactive enforcement, when necessary, and officers will use their discretion to determine the proper action, the release said.

The Ontario Emergency Management and Civil Protection Act, which was released on the evening of March 31 by the Ministry of the Solicitor General, temporarily gives provincial offences officers (including police and municipal bylaw officers) the power to demand people identify themselves when asked.

The full text of the Act requiring this is below:

People who are being charged with an offence under the Emergency Management and Civil Protection Act (EMPCA) will be required to identify themselves if asked by a provincial offences officer, which includes police officers, First Nations constables, special  and municipal by-law enforcement officers. This temporary power was approved by the Ontario government today through an emergency order to better protect people during this COVID-10 outbreak.

“It is essential that measures are in place to allow provincial offences officers to lawfully require an individual to disclose their correct name, date of birth and address in order to protect our communities,” said Sylvia Jones, Solictor General. “By providing provincial offences officers with this temporary power to obtain identifying information under the EMPCA they will be able to enforce emergency orders during these extraordinary times.”

Emergency orders currently in place to address the COVID-19 outbreak include the closure of non-essential businesses, prohibiting organized public events and social gatherings of more than five people and stopping price gouging on necessary goods such as disinfectant products. Failing to comply with any of these emergency orders is an offence under the EMPCA and so is the failure to identify oneself accurately.

Failing to correctly identify oneself carries a fine of $750 for failure to comply with an order made under the EMPCA or $1,000 for obstructing any person in exercising a power if a provincial offences officer issues a ticket. In addition, failure to comply with an emergency order could carry punishments of up to one-year imprisonment or a fine of up to $100,000 for an individual , $500,000 for a director of a corporation, or $10,000,000 for a corporation itself if a provincial offences officers charges the individual by issuing a summons.

These penalties apply in addition to the penalties for breaching other emergency orders.