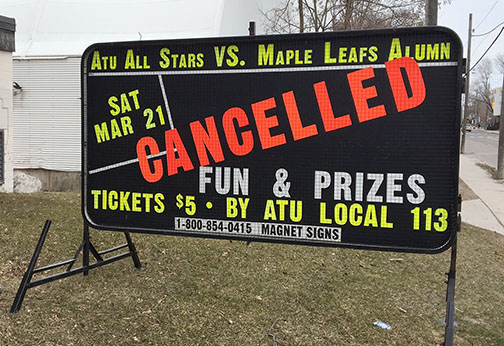 The sign says it all. The Toronto Maple Leafs Alumni versus Amalgamated Transit Union All-Stars charity hockey game at Ted Reeve Arena set for March 21 has been cancelled due to the COVID-19 crisis.

The scheduled charity hockey game between the Amalgamated Transit Union (ATU) All Stars and the Toronto Maple Leafs Alumni which had been set for Saturday, March 21, has been cancelled due to the COVID-19 (coronavirus) crisis.

The game had originally been scheduled to take place at Ted Reeve Arena.

The annual game is a fundraiser in support of multiple sclerosis research through the Samuel Lunenfeld Research Institute at Mount Sinai Hospital.

Also, the Toronto Open Disc Golf Tournament has been postponed until October.

The event was originally slated to take place this Saturday, March 21, and Sunday, March 22, at the Beaches Disc Golf Course in Ashbridges Bay Park.

The event was also slated for the same weekend at the disc golf course at Marilyn Bell Park. It was to be followed by a celebration at The Docks at Polson Pier.

The entire event has now been rescheduled to the weekend of Oct. 3 and 4.

In a statement sent to Beach Metro News, Toronto Open organizers said that their goal was to “do things right” and make sure safety was a priority for all.

“As we look to follow the City of Toronto’s lead, we have made the difficult decision to move the date for the tournament. We sincerely apologize for any inconvenience this may have caused,” said the statement.

Players who had already paid their registration fee for the Toronto Open will be provided with a full reimbursement if they do not wish to play in the rescheduled event in October, the statement said.

It had to moved to an October weekend date in order not to conflict with any other tournaments that were posted on the Ontario Disc Sports Association.

For more information on the Toronto Open, its rescheduled dates and the Beaches Disc Golf Course, please visit www.dgscene.com or www.pdga.com/announcements/covid-19-statement