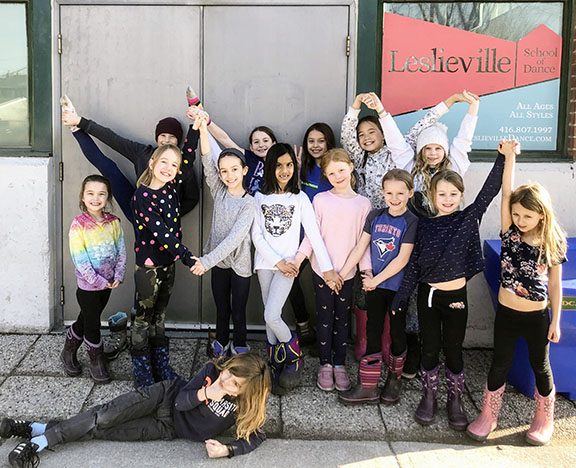 Members of the School of Dance Leslieville and East York are shown in this photo. The school will be closing both of its current locations at the end of June, and moving into one new space on Gerrard Street East.

The School of Dance Leslieville and East York will be closing both locations on June 30. They plan to open up their new studio that will be located at 1461 Gerrard St. E. immediately after.

Initially the dance school opened up on 20 Leslie St. in January of 2016 and the location at East York in September of 2018. The decision to close both locations was made after the new building owners at the Leslie Street location raised the rent.

“A large increase in rent was not something we could have expected, nor budgeted for,” said General Manager Corey MacDonald. “We are simply not large enough to be able to absorb the additional expense.”

Owner and instructor Kristen Dennis, who was a former dancer with National Ballet of Canada, started the school in 2012.

Dennis had also worked with the Alberta Ballet and Ballet British Columbia before deciding to move back to Toronto to be closer to family with her two sons.

Initially she rented space in the Ralph Thornton Community Centre for an hour to teach ballet. Dennis had walked door to door, put up flyers on community boards advertising her school, then named Monarch Movement.

Dennis bounced between teaching at another school in Oakville, operating a small dance school in Guelph and running seasonal arts camps in Guelph and Vancouver to help cover expenses.

“As her school grew, so did its administrative demands so eventually, she reached out to me for help,” said MacDonald.

“I believed so strongly in what Kristen was building that I gave up my career and joined her in the fall of 2015, helping to secure our first studio at 20 Leslie Street a few months later.”

After opening up the dance school along Leslie Street, they had been successful and ended up hiring two other instructors and had 75 students.

In 2018 once the East York location opened, it has grown to 12 instructors, two administrative staff and 650 students taking up to 800 classes between both locations.

There had been hardships along the way, including the rent increase, but they remain “optimistic” according to MacDonald.

“We searched for months before we decided to pursue this unit,” MacDonald said. “Our hopes were that we would be able to stay very close to the existing studio but there was just nothing suitable on the market.”

The dance school in East York was doing well but unfortunately to stay in the area, they decided to amalgamate both locations to this new one opening in the beginning of July.

They are excited with the new opportunities of the dance school opening up as the layout gives enough space to add more dance and music lessons to their programming.