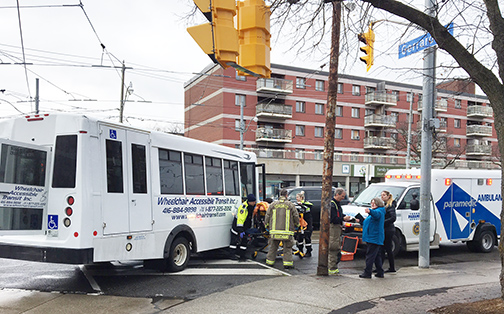 Safety in the Gerrard Street East area between Main and Woodbine was the focus of a recent community meeting. This photo shows a March 5 incident in which a pedestrian was struck by a vehicle at Main and Gerrard. Photo by Alan Shackleton.

Beaches-East York Councillor Brad Bradford says he will be helping area residents in their bid to have a crossing guard stationed at the signalized crosswalk on Gerrard Street East at Norwood Road where a 12-year-old girl was injured after being struck by a vehicle earlier this month.

Bradford made the commitment at a community meeting on traffic safety held for residents in the Main Street and Gerrard area on the evening of Thursday, March 12.

The meeting, hosted by the Might and Main coffee shop on Main Street, saw about 20 residents sit down with Bradford and a representative from the City of Toronto Traffic Services department to discuss safety in the area.

Attending the meeting was the girl who had been struck by the vehicle and her father. The girl suffered a broken arm, bruises and cuts after she was hit while legally crossing in the crosswalk on her way home from school on the afternoon of March 3.

The driver of the SUV remained at the scene and has been charged by police with careless driving causing bodily harm.

Many of the residents at the March 12 meeting expressed their frustration and fear about drivers regularly failing to stop at the Gerrard and Norwood crosswalk.

“I hit the button (to activate the crosswalk lights) and the first car will go through because he’s trying to beat the streetcar, the second car will go through and the driver waves apologetically and the third car goes through and the driver has no clue there’s even a crosswalk,” said one man at the meeting as he related what was a familiar story to those at the meeting regarding the Gerrard and Norwood crosswalk.

Residents also complained about the lack of police enforcement on the section of Gerrard Street East between Woodbine Avenue and Main Street. The speed limit is 40-kilometres-per-hour, but vehicles routinely travel much faster along the stretch of road. Presently, the only set of traffic lights on Gerrard between Main and Woodbine is at Glenmount Park Road. Along with the Norwood crosswalk, there is also a crosswalk at Golfview Avenue. Neither of those crosswalks have crossing guards.

Bradford told Beach Metro News after the meeting that his first priority will be to take steps to try and get a crossing guard assigned to the Gerrard and Norwood location.

“We will be starting the process of requesting a crossing guard there,” he said.

Residents at the meeting said what they really wanted at Norwood and Gerrard was traffic lights, a request that has been made two other times in the past five years for the intersection.

However, he said those past requests were made prior to the City of Toronto approving its Vision Zero plan which prioritizes the reduction of traffic-related injuries and fatalities.

Bradford said the long-term goal would be to make the request again for traffic lights at Norwood and Gerrard, and have it looked at through the “lens of Vision Zero.”

The meeting was also told the City of Toronto is pilot testing a number of different crosswalk designs which use different locations and types of lights to let drivers know the crossing button has been activated.

These are still in the very early stages of being tested, but residents at the meeting said more lights would certainly help make drivers more aware of the Norwood and Gerrard crosswalk. It was mentioned that some crosswalks in Hamilton, ON, have lower lights which strobe to make drivers aware of them.

A resident pointed out the length and height of the new streetcars on Gerrard does make it harder for drivers to see the crosswalk lights. “Nobody looks up anymore,” he said. “People are putting it to the mat and trying to get past the streetcar and the parked cars.”

Along with the specific issue of the Norwood and Gerrard crosswalk, traffic safety in the wider area was also discussed.

For instance, the odd design of the Main Street and Gerrard Street East intersection was brought up as a major concern with many of those at the meeting talking about accidents or near-misses they had seen there.

A separate signal for the streetcars turning right and left at the intersection was one of the suggestions made for improvement.

Bradford told the meeting the intersection was part of a much larger study for the entire area which would be looking at traffic, road design and development.