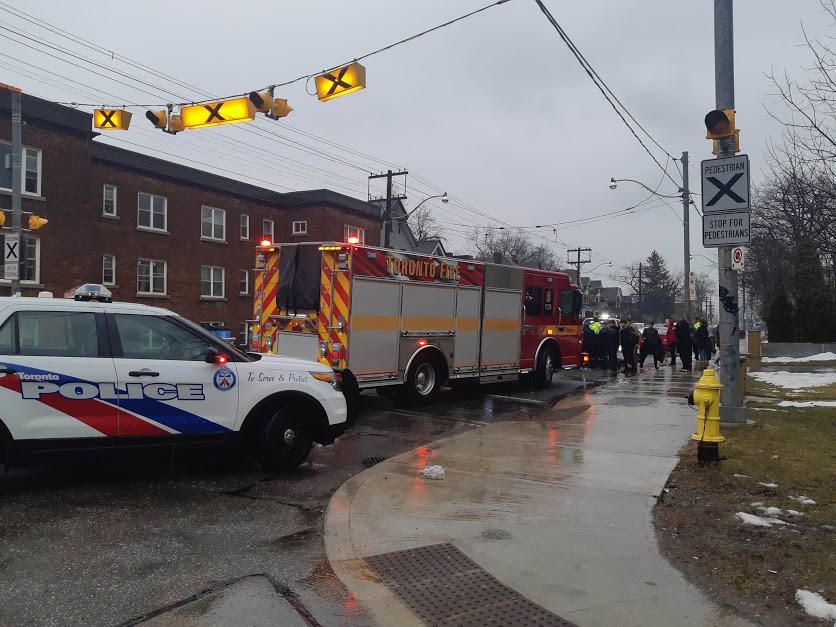 A 12-year-old girl suffered a broken arm after being hit by a vehicle in the crosswalk at Gerrard Street East and Norwood Road on March 3. Photo by Alana Rayman.

Residents in the Gerrard Street East area between Main Street and Woodbine Avenue are raising safety concerns after an incident last week in which a 12-year-old girl was injured after being struck by a vehicle.

The girl, who suffered a broken arm, was crossing Gerrard at Norwood Road in a marked crosswalk when she was struck by the vehicle on Tuesday, March 3, at approximately 3:30 p.m.

The driver of the vehicle involved remained at the scene and has been charged with careless driving causing bodily harm, Toronto police said.

After the incident, residents in the area took to social media to complain about how dangerous that stretch of road is with drivers regularly ignoring the posted 40-kilometres-per-hour speed limit, constantly changing lanes to get around streetcars, parked cars and vehicles making left turns.

“Please do a story on the speeding that happens on this stretch of Gerrard and the lack of police enforcement,” said one person on Twitter shortly after the girl was struck at the crosswalk. “Yesterday was the first time I saw more than one police vehicle on Gerrard. Driving w impunity. Me & dogs almost got hit by a driver at that crosswalk.”

One of the solutions residents would like to see to slow vehicles down is traffic lights at Gerrard and Norwood. Presently, the only set of traffic lights on Gerrard between Main and Woodbine is at Glenmount Park Road. There are also crosswalks at Norwood and Golfview Avenue.

Beaches-East York Councillor Brad Bradford said he has heard the concerns of residents, and he will be holding a meeting with some of them later this week to seek solutions and talk more about ways to make Gerrard Street East safer.

He said a set of traffic lights at Norwood, however, is highly unlikely to be approved by city council given its proximity to the lights at Main Street.

“It’s approximately 220 metres to Main Street from the Norwood crosswalk,” he told Beach Metro News in an interview last week.

That distance does not meet the minimum distance between traffic signals that Toronto’s Transportation Services calls for. Norwood is also approximately 260 metres from the lights at Glenmount Park.

However, Bradford said that “given the history of that particular crossing” he would be willing to look into traffic lights if they are deemed to be the best alternative for making the area safer.

Back in 2007, when a crosswalk was first sought at Norwood and Gerrard, a report from Transportation Services recommended against one being built at that time. The report said the proximity to the two signalized intersections was too close for a crosswalk to be needed, and that there were sufficient traffic gaps for safe crossing.

Council at the time voted to install the crosswalk despite the objections of Transportation Services.

Bradford said he would also be talking to police about enforcement along Gerrard Street East.

He pointed out, though, that the overall design of Gerrard Street East needs to be re-examined in order to make the street safer for everyone.

He pointed to the awkward design of the intersection at Main and Gerrard as part of the overall re-examination of traffic in the area that needs to take place guided by principles of Vision Zero which prioritize the reduction of traffic-related injuries and fatalities.

While Bradford was talking with Beach Metro News on the very subject of the Main and Gerrard intersection on March 5, a woman was struck by a vehicle making a right turn at the intersection. She suffered minor injuries.

Also, on Feb. 7 a vehicle ended up in the front yard of a home on Gerrard Street East just west of Norwood Road after being cut off by a speeding driver. The vehicle clipped a telephone pole and a tree, but did not hit the house. At that time, a nearby resident told Beach Metro News that the traffic was “insane” in the area at rush hour and she also lamented the lack of speed enforcement.