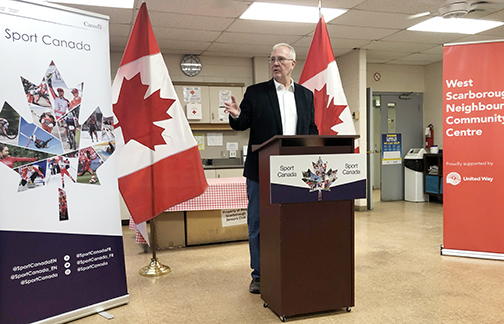 Bill Blair, Minister of Public Safety and Emergency Preparedness and MP of Scarborough Southwest, makes a federal funding announcement at the Boys and Girls Club of West Scarborough on the afternoon of Friday, March 6. Photo by Amanda Da Silva.

The federal government announced more than $200,000 in funding for sports programs for newcomer children at an event in southwest Scarborough last week.

Bill Blair, Minister of Public Safety and Emergency Preparedness and MP for  Scarborough Southwest, made the announcement at the West Scarborough Neighbourhood Community Centre on the afternoon of Friday, March 6.

The Boys and Girls Club of West Scarborough’s Bounce Back program, which is a trauma-informed sport program for newcomer children to Canada, will receive $218,435 in federal funding, Blair said.

The announcement was made on behalf of Steven Guilbeault, Minister of Canadian Heritage.

“Our government is proud to support innovative initiatives such as that create optimal environments for all Canadians to take part in sport,” Blair said.

“Everyone deserves to have access to sport opportunities, no matter their age, gender or background.”

The federal government realizes the benefit of sports for youth and views it as a powerful tool for integration from stresses they may have settling in a new community, the funding announcement said.

As part of Friday’s event, Blair was given a tour of the Boys and Girls Club of West Scarborough facility on Pharmacy Avenue.

“It’s always a very special thing to come here and see the extraordinary work that is going on.”

Blair said that during his time working in the Scarborough community he has met thousands of kids who grew up in this city and their lives were changed for the better by the work of the Boys and Girls Clubs throughout the city.

The funding is being provided through the Innovation Initiative of the Government of Canada’s Sport Support Program.