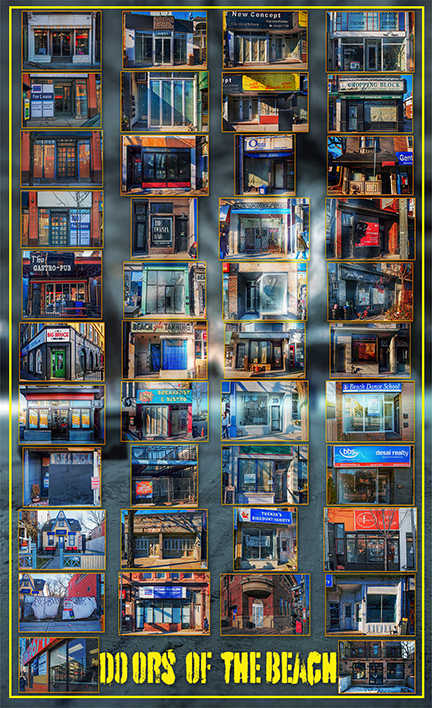 This Doors Of The Beach poster created recently by local resident Stephen Knifton shows the doors of closed storefronts along Queen Street East.

“I understand businesses come and go, it’s part of the business cycle,” said Knifton. “But here it started to get noticeable. It seemed like more and more and more businesses were closing all the time. You couldn’t walk half a block without passing two or three empty stores or closed restaurants.”

A couple of Sundays ago, Knifton walked along Queen Street East from Woodbine Avenue to the R.C. Harris Water Treatment Plant at Nursewood Road, taking pictures of all of the empty storefronts. There were a total of 42 empty storefronts, that he took photos of during that walk.

“I remembered these popular posters from the ’90s, the ‘Doors Of … ‘ series,” said Knifton. “They took photos of historic, nicely painted and/or beautifully designed doors and arrayed them into a poster. I thought I would commemorate whatever it is we’re dealing with in the same way.”

The reactions to his poster had been “hot and heavy” according to Knifton.

He said that on Facebook groups he was either being applauded for what he had put together and encouraged to send the poster to Mayor John Tory or Beaches-East York Councillor Brad Bradford or was chastised for “making a bad problem worse,” and not looking at the successful businesses along Queen Street East.

Some people said they wanted to buy the poster, said Knifton.

He said that his artwork has sparked conversations about the various problems that could be responsible for the empty storefronts along Queen Street East in the Beach such as high rents or how small businesses fit in competing against big retailers.

“When you see the heart of your neighbourhood start to decay, or what looks like decay, you start to worry about the culture and the foundation of where you live,” said Knifton.

“I have some ideas and so do others. There has to be creative and unique ways to solve this problem, but I don’t see any creative thinking or big ideas coming forward.”