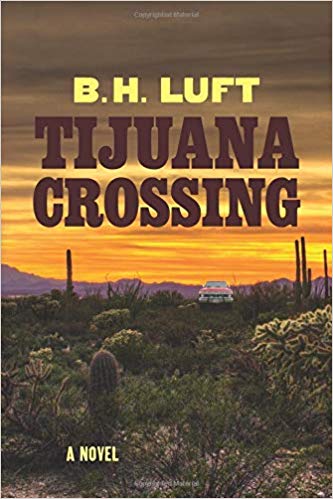 Beach resident Brad H. Luft has recently released his novel Tijuana Crossing which is now for sale in Toronto and online.

A 40-year resident of the Beach, Luft has been a volunteer with the local Out of the Cold program for years.

Luft originally signed up to work with Out of the Cold 10 years ago, when the organizer, Dr. Michael Chambers, asked him if he wanted to volunteer. Luft had started off cleaning, and then weeks after moved on to cooking and helping where needed.

As Out of the Cold’s services grew, more volunteers came to help out including guest chefs (such as staff from banks or various real estate companies.)

“When one of the first guest cooks came in one night, about seven years ago, there wasn’t much for me to do so I went home, grabbed my guitar and brought it back and I started playing in the big hall,” Luft said.

“They really loved that and asked if I would come back next week. For the past seven years I’ve been running the music program there where I bring in musicians and they play during the dinner hour.”

The Out of the Cold program runs on Monday evenings during the winter season (about 30 Monday nights) at the Beach United Church temporarily. The program will resume at St. Aiden’s in the Beach once renovations are done.

It attracts about 80 guests regularly. The guests arrive, have a chance to shower, get their feet inspected, have their blood pressure taken, take some donated clothes, have a hot meal and they get to enjoy a live performance from a local band.

After the music, the guests watch a movie and then go to sleep in the sanctuary area. In the morning they receive breakfast and a lunch to take with them when they leave.

“My heroes of the program are the morning crew, who get up super early in the morning and prepare a wonderful, hot breakfast for the guests each week,” said Luft. “All the volunteers are very dedicated.”

Sometimes during these Monday nights there are raffles with donated prizes from volunteers.

“One night I raffled my book and the guest who won it actually came back a week later and he had hand written notes critiquing my book,” Luft said.

Luft’s novel, Tijuana Crossing, is a historical fiction thriller about an ex-racer and journalist who are targeted in a highway scam. While being chased by the Mexican Feds, the U.S. Border Patrol, the local governor and a large drug cartel after them, they have to make their way from La Paz (at the southern tip of Baja peninsula) back to the U.S. without being caught or possibly killed.

After studying film and doing various projects along the way, Luft had decided to take his film skills and create an advertising and commercial company where he made documentaries and commercials.

Over the years, one of his contracts was a documentary of two riders’ first attempt at the Baja 1000 off-road in the 1990s. These riders were collecting funds themselves, training for the race and building a team together.

From that project, he got hired by TSN to cover the 25th running of the Baja 1000 race.

“While I was down there I just started interviewing everybody I could and I got about 50 hours of taped video interviews with all the racers,” Luft said.

“It was based on all those interviews and meeting locals, I created a menagerie of all of these real characters with fictional characters and then I just created this story in my head after having gone [to Mexico] three or four times.”

Tijuana Crossing is available to purchase through local booksellers including Coles (in early April), Book City in Toronto, Circus Books (along the Danforth) and on amazon.ca